Spotlight: A Film About Devotion to Truth, the Church, and a God Who Shows Up in Unexpected Places

Spotlight: A Film About Devotion to Truth, the Church, and a God Who Shows Up in Unexpected Places November 13, 2015 Ellen Painter Dollar

Of the many remarkable things about the new film Spotlight, the most remarkable is that this moving, engrossing, occasionally thrilling movie is mostly about a bunch of people—a team of investigative journalists at the Boston Globe known as “Spotlight”— going to work and doing their jobs. The filmmakers and actors draw us into the quiet drama of the newsroom without a single gimmick—no office romance, no explosive intra-office conflict, no idealistic newbie challenging the complacent or corrupt old guard, no dramatic speechifying just when all appears to be lost. We get glimpses of the reporters’ private lives, including a few scenes of Sacha Pfeiffer (Rachel McAdams) at home with her grandmother and husband, a few others of Mike Rezendes (Mark Ruffalo) in a bachelor pad where he lives apart from his estranged wife. But we come to know each of them primarily as journalists. We don’t need their backstories to stir up our sympathies, we only need to see them pursuing a horrifying news story with guts, devotion, and plain old hard work. 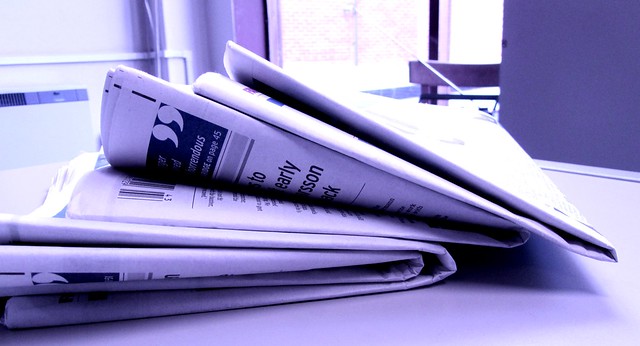 The story that consumes the Spotlight team for a year is not merely that dozens of Roman Catholic priests molested children in Boston-area parishes, but that the church hierarchy, including Cardinal Law, knew about and actively covered up the abuse. As new Globe editor Martin Baron (Liev Schreiber) reminds the team, stories of pedophile priests had been written before—and buried, and ignored. This time, he argues, they need to write a story about the corrupt system that moved abusive priests from parish to parish for years, with the full knowledge and cooperation of Law and the church hierarchy.

Spotlight follows the reporting team, which includes editor Walter “Robby” Robinson (Michael Keaton) and reporter Matt Carroll (Brian D’Arcy James) in addition to Pfeiffer and Rezendes, as they follow paper trails and interview victims. Horror dawns gradually, for the team and for us, as they use the simplest of tools—years’ worth of annual clergy directories in which suspect priests are labeled as being on “sick leave” or “unassigned,” spiral notebooks in which they scribble down victims’ stories—to discover the names of nearly 90 priests whose abuse was known and concealed. Victims’ stories are handled with restraint; we learn their stories just as the reporters did, not from emotionally manipulative flashbacks, but from matter-of-fact recitation of facts by men who have track marks on their arms, who weep over their styrofoam coffee cups, who ask the journalists more than once, “What took you so long?”

Also remarkable, in addition to Spotlight’s quietly insistent narrative pull, is the film’s treatment of the Catholic faith. We live in a time when many people find it easy to roll their eyes, in ridicule or disgust, at traditional Christianity. Hierarchical authority structures, tales of miraculous healing and feeding, looking to a 2,000-year-old book for guidance on how to live today—these and other aspects of Christianity are baffling to 21st-century citizens suspicious of authority, confidently reliant on science and technology, and more likely to seek perspective from our Twitter feeds or social media friends’ list than the Bible or our pastor.

Yet the Spotlight reporters, who have Catholic backgrounds but are not actively religious, never belittle the church’s power, never mock those who look to it for solace and meaning. A victim explains that for a poor kid from a poor neighborhood being raised by poor parents struggling to meet their family’s needs, special attention from a priest was powerful, like being hand-picked by God. As she becomes more and more aware of the terrible scope of the story, Sacha Pfeiffer dreads the moment that her Nana, a three-times-a-week churchgoing Catholic with whom Pfeiffer occasionally attends services, will learn of what her beloved church has done. As the extent of the church’s duplicity and betrayal sinks in, the journalists reserve their ire solely for those who perpetrated and condoned evil acts, imposing judgment only on those who preyed on the devout, not on those who paid such a steep price for their devotion.

The question I was left with as the final credits rolled was: Where was God in this story? In the only scene in which an abusive priest speaks about what he did, he never mentions God. The victims don’t tell us how being abused by someone who was “like God” in their young eyes has affected their adult relationship with God and the church that was once the center of their world. We see the grief in Pfeiffer’s Nana’s eyes as she reads her granddaughter’s exposé, but we don’t see what she does when the next Sunday rolls around and it’s time for church.

So where was God in this story? It’s a question the filmmakers don’t answer, because it’s irrelevant to the film’s central story. But while Spotlight is not really about God, I was still left pondering whether I saw God in its story, and where. God chooses the most unlikely people to do God’s work, from a stuttering, exasperated Moses to a baby born in a barn. In Spotlight, different characters claim in several  scenes that the abuse scandal need not be made public, because the Catholic church is doing God’s good work and the story will just undermine that work. But in fact, the people publicly entrusted to do God’s work were not the ones doing God’s work.

Instead, the Spotlight journalists are the ones who do God’s work by seeking truth and paying attention to the voices of the marginalized and neglected. As God is prone to do, God turned expectations upside down, entrusting outsiders—lapsed, agnostic, estranged—to do the work that the insiders were too complacent, comfortable, and blinded to do themselves. Spotlight is a very fine film, about good old-fashioned journalism, about what happens when an institution supposedly dedicated to God is instead dedicated to its own preservation, and about devotion—to an institution, to the truth, to getting the story right. For me, it was also about how underneath layers of history that muddle and complicate the Christian story lives a God who continues to show up where we least expect him.

I saw “Spotlight” free of charge at a screening for journalists. This post is part of a Patheos “Movie Club” on the film.

October 26, 2015
On Marriage, Church, and Sticking Around When Things Get Hard
Next Post