In the aftermath of the terrorist attacks in Paris, I added an overlay of the French flag to my Facebook profile photo. I read every article on the attacks in the Sunday newspaper, pausing now and then to whisper a quick prayer—“Lord, have mercy”—and all too easily imagining what it might have been like to be at a concert, dining with friends in a café, or watching a soccer match as horror dawned that those bangs and pops were bombs and guns. I went to church with a clear intention to pray for the people affected by Friday’s attacks in the French capital. 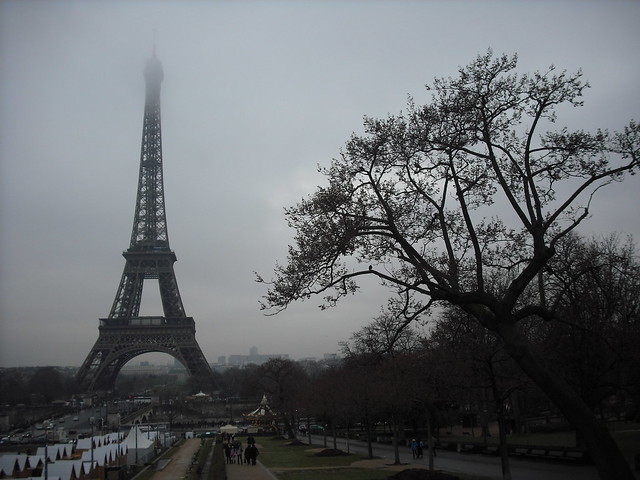 I didn’t do any of these things in response to a terror attack on students at a Kenyan university in April, which killed nearly 150 people, or attacks in Beirut the day before the Paris attacks that left 40 dead.

So I am the intended target of blog posts, tweets and status updates calling for more equitable distribution of our grief and outrage, criticizing Americans for so readily expressing our empathy and agony for Paris, while skimming over or ignoring outright similar tragedies in Africa and the Middle East.

While I’ve never been to Paris, I know many people who have, including a couple of high school friends who live there. That I’ve seen photos of people I know and love on Parisian streets, eating at Parisian cafés, and posing in front of Parisian landmarks makes Paris feel familiar to me in a way that Kenya or Beirut are not. I took French in high school and college. Many aspects of my life—my family history, the food I eat, my education, my dad’s college teaching career, the music I listen to, my nation’s history—is linked to Europe and European history. These connections mean that it’s easy for me to identify with the attacks in Paris, easy to imagine that it could have been me or someone I care about in that concert hall or stadium.

Some of what underlies my sense of connection to the Paris attacks needs to be challenged, such as the extent to which I (and lots of other white Americans) define our country’s heritage as white and European despite a large and growing population from Latin America, Africa, and Asia, or the Eurocentric nature of the literature and history I studied in school.

But that some aspects of my affinity for particular places, cultures, and people are rooted in my skewed experience doesn’t negate that the affinity exists, and that the pull of affinity is particularly powerful in emotionally charged circumstances. Quite simply, I respond to a greater extent to difficult stories about people to whom I feel connected. I pay more attention to news stories about famine or war that center on mothers and children, because I’m a mother with children. After every mass shooting, I make a point of reading about the victims, but I can recall the names, faces, and stories of the first graders murdered on December 14, 2012, at Sandy Hook Elementary School to an extent that I cannot recall victims of other shootings, because my son was in first grade that year as well. In my nearly 16 years of being a mother, a handful of kids in our town have died from illness or accident. I always feel a stab of grief for their parents and siblings, left to figure out how one keeps going to work, buying groceries, and cheering at the other kids’ soccer games after a child dies. But the death I remember most, the child whose house I occasionally drive by on purpose just to say a prayer for his parents and sister, is a two-year-old who drowned in his evening bath. He was two months older than my son, the towheaded child gazing out from the news photo so evocative of my own chubby-cheeked little one.

Empathy is not a zero-sum game; caring about one tragedy doesn’t prevent me from caring about another. But neither is our capacity for empathetic engagement unlimited. We do not have the emotional or intellectual capacity to respond to every tragedy with equal measures of outrage or pain. We gravitate toward stories about people with whom we feel an affinity.

Of course, to the extent that our affinities are rooted in misinformation, ignorance, damaging historical legacies, and prejudice, we must challenge them. The disparity in reactions to the Paris attacks vs. other terrorist attacks raises vital questions about media bias; Americans’ limited and skewed perceptions of particular places and peoples; and how Western interventions in the Middle East have influenced the development of terrorist groups.

Christians, furthermore, are called to stretch our limitations and affinities. Our capacity for empathy may be limited, but God’s love is not. Jesus pressed his followers to care for outsiders and question our responsibilities to family or tribe if they become roadblocks to our answering God’s call. The way of Jesus is one in which we begin to feel an affinity for all people, regardless of whether we have common experiences or cultures, because we see everyone as one of God’s beloved.

Our human limitations and affinities are not excuses for complacency. The questions raised in recent days about differing responses to a series of terrorist attacks are important ones for us to ask—but perhaps not immediately, as we struggle to assimilate information that’s still coming in, and perhaps not in tweets and status updates that end up sounding judgmental. The perspective required for introspection and change is difficult to come by when we’re in the midst of shock and grief, and hard to communicate in 140 characters or less.

Social media posts accusing us of inequitable outrage exemplify two common patterns of online interaction. First, any prevalent narrative unfolding online (in this case, dismay, outrage, and empathy for Paris) is challenged, often fairly quickly, by a counter narrative. The “everyone thinks this but I actually think THAT” counter narrative is an almost sure bet for getting reactions and clicks…until, that is, the counter narrative becomes so prevalent that other people start arguing that the first narrative was really not so bad. (And yes, I’m doing exactly that—appealing to the virtue of the initial narrative over the counter narrative.) At its best, the narrative/counter narrative pattern inspires lively debate and provides a needed corrective to widely accepted interpretations that are biased, damaging, misleading, or just plain wrong. At its worst, this pattern promotes endless click bait that does little to move the conversation forward, as substance and good sense take a back seat to provocation and traffic spikes.

Second, declarations of what is and is not okay to say or do in a particular circumstance have become social media staples. Posts tell us what to do and say (and what not to do and say) when someone is sick, disabled, grieving, unemployed, pregnant, not pregnant but wanting to be pregnant, a new parent, childless, an adoptive parent, recently married, recently divorced, recently widowed….and so on. Such posts are usually well-intentioned, and can be useful. But as my friend Rachel noted in a blog post last year, these ubiquitous correctives to other people’s behavior can convey a note (or a whole symphony) of pride, “that we, not they, know the right words; that we, not they, are righteous in our indignation, even if their intentions were innocuous.” These correctives lack a measure of grace, a recognition that when we are reacting to a situation that is uncomfortable, difficult, unusual, tragic, or even especially joyful, our emotions take charge, and our emotions are unruly, inconsistent forces ill-suited to following a list of rules.

That’s what most bothers me about the tweets and status updates urging us toward more equitable distribution of our empathy in response to last week’s terror attacks—the tone of chastisement, the absence of grace extended toward people struggling, in the grip of strong emotions, with how to respond to the terrifying images and stories populating our screens.

Those arguing for outrage equity are right to press us to question our assumptions, examine our biases, and ultimately move closer to a world in which our grief for the victims of evil acts does not differ according to where or what sort of life they live. But for now, with the dead and wounded still being accounted for, with critically injured people and grieving relatives in the raw and agonized early days, with much about the perpetrators and how we should respond still unclear, we need to offer one another grace to voice our grief and anger, skewed as they may be by the limitations and affinities that render our responses imperfect, and unmistakably human.

November 13, 2015
Spotlight: A Film About Devotion to Truth, the Church, and a God Who Shows Up in Unexpected Places
Next Post

November 24, 2015 Serving God When You're Not Sure God is There
Recent Comments
0 | Leave a Comment
Browse Our Archives
Follow Us!

Five Ways To Be The Church...
Irreverin
Related posts from Ellen Painter Dollar

Progressive Christian
I Have Three Things to Say About "The...
Ellen Painter Dollar