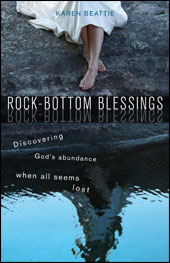 Karen Beattie and her husband went through a difficult few years. She was unexpectedly laid off just as her husband decided to go back to graduate school, leaving them without regular income from employment. After a miscarriage and a bunch of dead ends on their quest to adopt a child, they realized they might never become parents. Beattie begins to wonder where the abundant life promised by God is, why their prayers to adopt a child aren’t being answered, if God is condemning them to a life of financial insecurity because they haven’t always made perfect spending decisions. Beattie’s spiritual memoir Rock-Bottom Blessings is an account of these hard years, and of Beattie’s continuing to seek God through them, as she learns more about what a truly abundant life looks like. (Hint: It’s not a life in which all of our prayers are answered as we wish them to be. It’s not a life in which, so long as we are careful with our money, stick to a budget, and tithe, God will bless us will material wealth.)

These are the moments from Rock-Bottom Blessings that are sticking with me:

As Beattie explores and eventually converts to Catholicism, she finds comfort in the paschal mystery—the invitation to join Christ in his suffering on the cross, rather than simply seeing the cross as something that God did for us while we stand on the sidelines. A friend points out to Beattie that the verse “I came that you might have life, and have it abundantly,” is frequently misinterpreted because of where we put our emphasis. We emphasize the “abundant” part, and think this verse means we’ll get all sorts of good stuff when we believe. But Jesus first said that we might have “life,” and life is full of pain as well as joy. Beattie’s friend reminds her, “That verse doesn’t say, ‘I came that you might have abundance.’ It really says, ‘I came that you might have life’—life in all its joys and sorrows and ups and downs, life in all its chaos.”

Consumed with envy, particularly for friends and acquaintances who meet many fewer roadblocks on the road to adoption than she and her husband do, Beattie tries all sorts of remedies. She tries to “fake it til she makes it,” acting happy for other people’s good fortune, holding their babies, congratulating them on their professional successes. And that helps, “sort of.” Finally, she goes to confession, and realizes that what she really wants is proof that God loves her, in the form of prayers being answered as she wants them to be. The priest sends her off not with penance, but with an invitation to pray that she will know God’s love for her.

And in the book’s final scene, Beattie is at home with the toddler daughter that eventually came to them through foster care. The child is fighting sleep, and fighting against Beattie, thrashing and arching, allowing her body to communicate her hurt and confusion over the frequent upheavals and uncertainties of her young life. Beattie keeps holding her, despite the little girl’s struggling, assuring her through both of their tears, “You are home. You are home.” The same might be said for us, as we thrash and fight against the life we’ve ended up with, failing to hear God’s voice telling us that, even here in our uncertainty, confusion, and hurt, we are home.

(Beattie writes more about this experience with her new daughter, and how it relates to her decision to convert to Roman Catholicism, in a lovely post on the Patheos Catholic Channel. My blog post is part of the Patheos Book Club discussion of  Rock-Bottom Blessings.)

Trumpism IS white evangelical witness, the whole of...
Please rest assured, ministers and gatekeepers of white evangelical Christianity, massive white...
view all Progressive Christian blogs
What Are Your Thoughts?leave a comment
Copyright 2008-2020, Patheos. All rights reserved.