[Snapshots from Oak Ridge] The Problem with Universal Self-Esteem Boosts

It has become a cultural cliché, how our children are bombarded with efforts to raise their self-esteem by, for example, giving every kid on the team a trophy. The problem, of course, is that not every kid is a great tee-ball or basketball or whatever player (I can attest to this from experience as a parent on many a sideline). Not everyone deserves a trophy for being great at whatever, because not every kid is great. Giving every kid a trophy fails to reward the hard work (and yes, probably innate skill ) of those kids who are truly great.

There are, of course, ways to recognize individual efforts and talents while still recognizing that everyone has something to contribute. We can affirm that everyone is good at something, without pretending that everyone is good at the same thing. So, for example, at our elementary school’s end-of-year awards assembly, every student gets an award. But the teachers designate a particular award for each child, based on the child’s actual gifts, talents, and efforts. A child might get an award for reading, math, physical education, music, or art, for most improved or hardest effort, or (my favorite), for good citizenship, which goes to kids who are kind to everyone and who are always willing to help and collaborate with other kids.

So there are reasonable ways to reward kids in a way that applauds their skill and effort without making stuff up. Emphasize that everyone has gifts and can contribute, but those gifts and contributions will vary greatly.

Unfortunately, some self-esteem boosts are still tainted by nonsense. And our kids know it. Case in point: 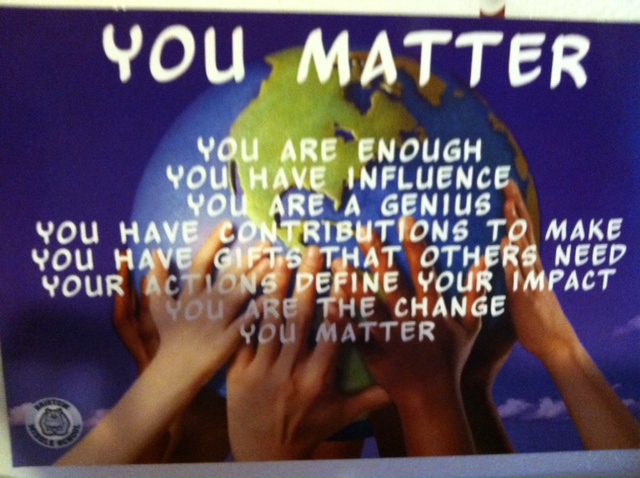 This magnet is on our refrigerator; every student at my daughter Leah’s middle school got one the first week of school. They got a second one to hang in their lockers. There are posters with the same message all over the school.

I’m proud to say my daughter immediately saw the inherent problem with this message. I present you with a conversation, as recounted by Leah:

(On the bus coming home from middle school)

Leah: Those posters and magnets are so dumb. We are not all geniuses. Albert Einstein was a genius. Most of us are not.

Kid on Bus: Yeah, you know, you’re right. And besides, what makes Albert Einstein so great? All he did was invent the light bulb.

November 4, 2013
My Story, and My Take on Narrative Ethics, in a Nutshell
Next Post

November 11, 2013 Redeeming My Grocery Routine to Feed Those Who Are Hungry
Recent Comments
0 | Leave a Comment
Browse Our Archives
get the latest from
Ellen Painter Dollar
Sign up for our newsletter
POPULAR AT PATHEOS Progressive Christian
1