My Story, and My Take on Narrative Ethics, in a Nutshell

My Story, and My Take on Narrative Ethics, in a Nutshell November 4, 2013 Ellen Painter Dollar 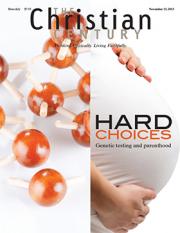 I have a cover article in the current issue of the Christian Century that summarizes the story I tell in my book and outlines my take on how narrative, or story-based ethical reflection can help us learn humility as well as avoid making people’s complicated stories into morality tales. It begins:

In the wee hours of a late August morning, I sat exhausted but wide awake beside the bed of my two-and-a-half-year-old daughter. A pink fiberglass cast stretched from Leah’s chest down her entire left leg and partway down the right. The previous afternoon she had broken her left femur. Her thigh bone split in two and nearly end to end when she slipped on a book left lying on the floor.

After a harrowing trip to the emergency room, during which her thigh swelled to twice its size, a team of men in scrubs sedated her and then straightened and wrapped her broken leg.

Leah had broken some bones before—a couple of broken tibias (shinbones) and a broken arm. But I knew from experience that a femur fracture is a different kind of break—more painful and more disabling.

It was dark when we finally got home from the emergency room. After filling her with pizza, narcotics and sedatives, my husband and I settled her down to sleep. But every time she began to relax, the traumatized muscles surrounding her broken bone seized, causing jolts of pain that woke her up. Her pitiful, weary cries chipped away at the remains of my composure. Finally, another dose of sedatives allowed her to drift into oblivion. I was left to ponder what we had gotten ourselves into with this beautiful child.

We brought Leah into the world knowing that she had a 50 percent chance of inheriting my bone disorder, osteogenesis imperfecta, a collagen defect that led me to have three dozen broken bones before my 11th birthday, along with nearly a dozen surgeries and uncounted disappointments and humiliations. We hoped Leah wouldn’t inherit OI but suspected that she had even before the lab test confirmed it when she was six weeks old. Our hearts broke every time she was sidelined with another broken bone, every time circumstances made it starkly clear that our fragile girl could not inhabit the world as safely as her peers could.

As we learned how to be parents to Leah, we were haunted by the question of whether we could take the chance of having another child. That question roared back to life as I sat next to Leah after her femur fractured. Given what we all had gone through, the answer seemed clear: no.

Read the rest on the Christian Century web site. And if you’re intrigued and want to read even more, you could always, you know, buy my book!

October 25, 2013
[Snapshots from Oak Ridge] The Still Point
Next Post

November 8, 2013 [Snapshots from Oak Ridge] The Problem with Universal Self-Esteem Boosts
Recent Comments
0 | Leave a Comment
Browse Our Archives
get the latest from
Ellen Painter Dollar
Sign up for our newsletter
POPULAR AT PATHEOS Progressive Christian
1