An New York Times op ed by Marcy Darnovsky of the Center for Genetics and Society cautions against FDA approval of a technique that could produce genetically modified babies. The FDA is considering mitochondrial manipulation technologies, which would allow women at risk of bearing children with mitochondrial disease to have healthy, genetically related children. In mitochondrial disease, which affects several thousand U.S. children each year, the cells’ mitochondria, or “power houses,” fail to convert food into energy. Disease symptoms can range from mild to severe. In the proposed technology, a woman at risk of having children with mitochondrial disease would have nuclear material removed from one of her eggs. That nuclear material would be inserted into an egg from an unaffected donor. The resulting egg, containing the nuclear DNA from the prospective biological mother and the healthy mitochondrial DNA from the donor, could then be fertilized by the prospective father’s sperm and grow into a healthy baby. 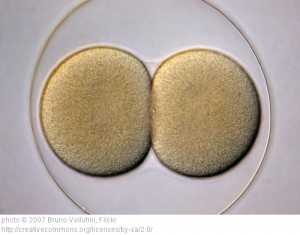 Darnovsky raises several key objections to this technology, including the unknown health risks that these genetic modifications could pose to any children born as a result. She notes that many in the scientific community have largely agreed that, “Genetic modifications of sperm, eggs and early embryos should be strictly off limits. Otherwise, we risk venturing into human experimentation and high-tech eugenics.” Another key point is that, contrary to how these technologies and others (such as preimplantation genetic diagnosis, or PGD) are frequently cast, they don’t actually save lives, in that they don’t alleviate symptoms of existing people who are sick. Rather, these technologies seek to prevent diseases and genetic disorders from occurring in the first place. With mitochondrial manipulation technologies, disease is prevented by joining material from two eggs taken from two different women. With PGD, disorders are prevented by only selecting unaffected embryos for implantation during an in vitro fertilization (IVF) cycle. Both techniques raise serious ethical questions, about whether creating genetically modified babies or disposing of embryos affected by genetic disorders raise such significant moral concerns that we ought to approach them cautiously, despite the compelling possibility of healthy babies.

I agree with Darnovsky’s concerns with mitochondrial manipulation technologies. I also found myself contemplating these sentences in particular:

Others have failed to note how very few women would be candidates for even considering them. And they could turn to safer and simpler alternatives. An affected woman could adopt or use in vitro fertilization with another woman’s eggs. Of course, the resulting child would not be genetically related to her, but neither would the child be put at grave risk by an extreme procedure.

While donor eggs, IVF, and even PGD are potential options for women at risk of having children with mitochondrial disease to have babies, these techniques also raise significant ethical concerns. Women in this situation don’t have any ethically, emotionally, or physically straightforward and simple way to have children without risk of mitochondrial disease. I’ve read enough of Marcy Darnovsky’s work to believe that she would absolutely agree that the options she names—donor eggs and IVF—raise concerning ethical questions of their own. The hard fact is that any woman at increased risk of having a child with a genetic disorder faces very difficult choices, because there is no easy choice. (Hmmmm…Where have I heard that phrase before?) As Christians, our first response to women facing such difficult choices ought to be empathy and compassion. No matter what we think of reproductive technology from an ethical standpoint, we must first recognize the grief and angst people bear when they cannot simply get pregnant and hope for the best as most parents do.

The rarity of mitochondrial disorders is an argument in favor of extreme caution when considering whether or not genetically modifying babies is justified. But for the women at risk of having babies with this disorder, and their partners, the condition’s rarity is meaningless. This is their babies we’re talking about. In some cases, women willing to undergo this technique will already have children who have suffered or even died from a mitochondrial disorder. For them, this is a deeply personal issue affecting the children with the chubby hands they will wipe after breakfast each morning, the eyes and lips and cheeks they will stroke at bedtime each night. We believe in a God who knows and loves every human being intimately, who numbers the hairs on our heads. Parental love reflects the intimate, knowing love of God—a fact that, again, calls us primarily to compassion toward parents for whom ethically fraught technologies feel like an answer to a thousand wrenching prayers.

Finally, God’s intimate, deeply personal love of each and every human being is another reason that we should question whether genetic modification of babies is justified or just too potentially dangerous. We understand a lot about how babies are conceived and borne. But there’s still a lot we don’t understand. In her op ed, Darnovsky reminds us that many predictions from the early days of genetic science, about how our knowledge would lead to cures for diseases and other wonders, have not come to pass.

While we understand much about the mechanics of reproduction and genetic information, much of the process is still shrouded in mystery. In that mystery, I, as a believer, see a reflection of God’s intricacy and mystery, and a message of sorts about what it means to be human. Our humanity cannot be reduced to our genetic code. There is so much about how we become who we are, about how genetics does and doesn’t influence that process, that we don’t understand. Might we someday? Perhaps. But right now, there is too much unknown for us to say “yes” to techniques leading to genetically modified babies, even as we understand how these techniques would potentially provide hope and health to families affected by mitochondrial disease.

February 26, 2014
The Problem with the Honey-and-Cinnamon (& Every Other) Miracle Cure
Next Post

March 3, 2014 Writing Letters for Lent
Recent Comments
1 Comment | Leave a Comment
Browse Our Archives
get the latest from
Ellen Painter Dollar
Sign up for our newsletter
POPULAR AT PATHEOS Progressive Christian
1

Will The Church Survive The Covid-19...
The Thoughtful Pastor
Related posts from Ellen Painter Dollar