Why I Support the Ordination of Women & LGBTQ People

Why I Support the Ordination of Women & LGBTQ People March 26, 2014 Ellen Painter Dollar

I could go in lots of directions with this post.

I could write about how a defining quality of Jesus’s earthly ministry was his radical invitation to people on the cultural margins—women, children, people who were poor and sick—to join in fellowship as equals. He sometimes went a step further, preaching that children and the poor weren’t just invited along for the ride, but deserving of honor and leadership roles. I could write about how following Jesus’s example means inviting those in our culture who have to fight for equal footing in so many places, such as women and LGBTQ people, to participate fully in Christian community life, including ordained ministry. 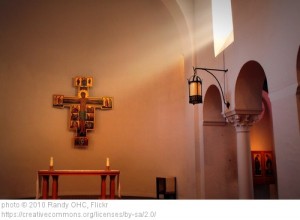 The radically inclusive nature of Jesus’s ministry and the nature of Biblical interpretation are important, and have something to do with why I support the ordination of women and LGBTQ people. But they are not the primary reason.

I support the ordination of women and LGBTQ people because if I didn’t, I would have to look people in the eye and tell them that I don’t believe that their call to ministry is real.

I think of Carol, one of my housemates in D.C., who described her call to ordained ministry as a vision she had of herself preaching and presiding at the altar during Eucharist. I think of the associate priest at my church, for whom preaching is more than a skill or interest. It is a gift. Curtis’s sermons are marked by thoughtful content and a masterful delivery that uses rhythm and dynamics along with words to get the message across. I suppose he could use this skill as a motivational speaker or university professor. But every time I hear Curtis preach, I am convinced that he was meant to do this.

I can think of a half dozen other women and LGBTQ people whose pursuit of ordained ministry is not just a career choice, but a calling. We cannot, of course, prove a calling. And the idea of calling can be abused by, for example, fundamentalists convinced that God has called them to preach that “God hates fags” or to fly planes into buildings. But even outside of the church, we know what it looks like when someone is so obviously suited for a particular kind of work, when passion and skill come together in a mysterious alchemy that makes the hard work they do look easy (even if it’s not). We name such a phenomenon a “calling.”As Christians, we believe that calling comes from God—perhaps not as clearly as Carol’s vision of herself at the altar, but through inklings and conversations and prayers and paying attention to what makes our hearts beat a little faster and who comes to us looking for help and of what kind.

I support the ordination of women and LGBTQ people because of Carol and Curtis and so many others whose work is so clearly building God’s kingdom. I support them because denying their call to ordained ministry would be denying God.

On a related subject, I have this to say about the World Vision controversy:

World Vision is an evangelical organization that enlists individuals to sponsor poor children around the world. World Vision has always required employees to practice abstinence outside of marriage and fidelity within marriage. Now that same-sex marriage is legal in more and more places, they have announced that people in same-sex marriages are eligible for employment. A spokesman says that this move should not be read as an endorsement of gay marriage, but as a gesture toward Christian unity: “This is not us compromising. It is us deferring to the authority of churches and denominations on theological issues. We’re an operational arm of the global church, we’re not a theological arm of the church. This is simply a decision about whether or not you are eligible for employment at World Vision U.S. based on this single issue, and nothing more.”

I am moved, pleased, and yes, surprised by World Vision’s willingness to make a clear policy statement that errs toward inclusion and generosity, while also recognizing that Christians can and will disagree on matters of theology and ethics. I read one Facebook commenter who, bemoaning the nasty turn that conversations about World Vision’s decision have taken, wrote, “We live in a culture where everyone has to be right.” What I most appreciate about how World Vision framed their decision is that they made a limited policy decision without pontificating on the larger issues involved. They did what they believed was right for their internal policy while recognizing that there is more than one way to be “right” on a Christian position toward gay marriage.

I am not surprised by the predictable backlash by some conservative Christians  (like this one) who insist that World Vision’s decision is nothing less than the “collapse of Christianity.”

While I support gay marriage and full inclusion of LGBTQ people in church life, and believe that position is consistent with Christian theology and ethics, I also respect other Christians—not hate-filled homophobes, but thoughtful, insightful Christians—who believe that gender difference (i.e., two different genders, male and female) is an unequivocal requirement of marriage as God intended it. I do not, however, respect the elevation of issues around human sexuality to such a level that they become firm measures of whether one’s Christianity is legitimate or “collapsing.” To make one’s view on gay marriage, or any other sociopolitical issue, a central marker of whether one is or is not a follower of Jesus is idolatry—a worshipping of fallible, limited human opinion over the infinite God of the universe.

UPDATE: World Vision has announced a reversal of their earlier decision, calling it a mistake. When I wrote this post, I was so impressed with their thoughtfulness and courage. Now I’m just disgusted.

March 28, 2014 Why I'm Grieving World Vision's Decision
Recent Comments
5 Comments | Leave a Comment
Browse Our Archives
get the latest from
Ellen Painter Dollar
Sign up for our newsletter
POPULAR AT PATHEOS Progressive Christian
1