Revelation on an Ordinary Wednesday

(This post is a departure for me, more of a creative semi-autobiographical vignette, perhaps even a piece of what could become a short story. Whatever it is, it has been wanting to be written for many weeks now.)

She was alone in the kitchen, the weak gray light and clink of dishes as she unloaded them from the dishwasher signs that another ordinary Wednesday was coming to a close. While sitting down for a family dinner most nights was a point of pride for her, tonight was one of those nights when everyone would eat at different times. Her husband was away, the younger children had already eaten, and her teenage daughter would be calling any minute to be picked up after arriving back at school from a field trip.

As she moved about the kitchen, fetching rolls from the pantry and preheating the toaster oven to warm a chicken cutlet for her daughter, it happened. These ordinary movements, so automatic for her after 15 years of being the one who makes sure everyone, including the animals, goes to bed with a full stomach, became charged with intensity and purpose.

This remarkable energy was, in part, simple gratitude. For her, gratitude was a discipline of sorts; she made a point of thanking God for basic luxuries, like being able to feed her children when they were hungry. But on this ordinary Wednesday, her gratitude was not merely expressed but felt, arising from deep in her gut to quicken all she could see and touch. She looked around, at the food she had gathered, the stack of sturdy white dinner plates, the polished cherry table, the bay window overlooking trees touched by autumn’s first flicker, the colorful framed prints and pottery pieces gathered and received over so many years. That she should have the privilege of providing these simple things—this bread, this beauty—to her family, night after night, seemed nothing less than the most essential kind of miracle.

Her cell phone pinged. Her daughter was texting that the bus would arrive back at school any minute. She gathered jacket, keys, and phone, shouted upstairs to the other kids that she would be back in just a few minutes, and went out to the minivan for the short drive down the hill to the high school.

It was fully dark now. At the stop light at the end of her street, she went over all that needed to happen before she could crawl into bed: homework, piano practice, showers, make school lunches for tomorrow, get the cat in, let the dog out for one last pee, double check that doors and windows are locked. She was always a little skittish when her husband was out of town. Her son still asked to sleep in her bed when his dad was away. His presence helped her sleep better, though she was perfectly aware that an eight-year-old wouldn’t be much help in a true emergency. She was still, frankly, a little afraid of the dark.

The light changed. As she drove forward, just before beginning the steep descent toward the high school, the moon came into view and she gasped. (She thought later, when she mulled over this moment, that if someone told her that they gasped at the sight of the moon, she would not have believed them. She would have assumed the gasping was just a way of conveying how startling and beautiful the moon had been. Surely no one would actually gasp out loud, alone in a minivan on a suburban hilltop. But she really did gasp.) 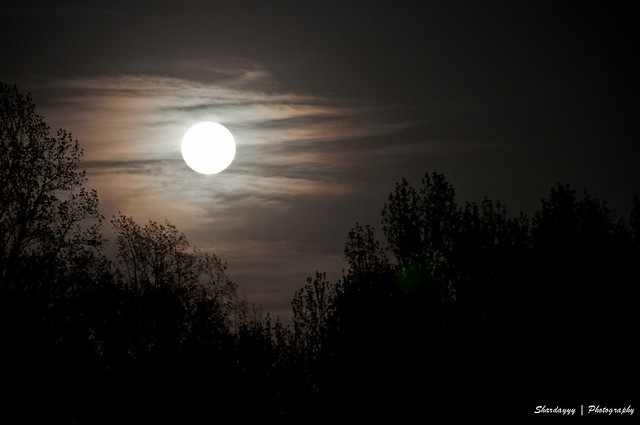 The moon, just risen and full, hung above the treetops, so bright and huge that she felt disoriented. A moon this stunning did not belong here, above this modest land of gentle hills and wood-frame colonials on quarter-acre lots. But here it was. She strained to absorb its singular majestic gleam, before cresting the hill and beginning the downward journey.

I must remember this, she told herself. She understood that this radiant presence shining upon a world brimming with good gifts was the most vital thing she had seen in a long time.

She understood too that this vision and this conviction would be fleeting. Tomorrow night, bread and chicken and plates would just be bread and chicken and plates, things to be prepared, eaten, and washed whether she felt like preparing, eating, and washing or not. The moon would be there still, of course, but she wouldn’t notice it as anything more than a blotch of hazy light, obscured by the dark trees in her backyard and glimpsed through her bedroom window just before she pulls the shades. The moon would become a little bit smaller each night, a little less bright, until it would be not just unnoticed but unseen, cloaked entirely in darkness.

But she would know it was there. She would remember tonight.

Already, as she turned into the school parking lot and began looking for her daughter’s lanky silhouette among the figures gathered on the sidewalk, the bracing hum that had invigorated her drive was fading, replaced by the usual late-day fatigue, the compulsive tedium of the nightly to-do list. As she pulled into a parking space and waved to her daughter, she clung to the revelation of this night, when ordinary things were illuminated, and the moon, pulsing with light, hovered above the familiar landscape, awaiting her astonished regard.

Answering Questions About God, Hell and the Bible
I get questions from people on a regular basis via social media....
view all Progressive Christian blogs
What Are Your Thoughts?leave a comment