On a Difficult Anniversary, Making Room for the Better Stories

This morning, as I drove past one of the 11 elementary schools in our town, I conjured up a deliberate blankness, hoping that the schoolyard’s playscape, chain-link fence, and scarred blacktop would fail to snag my attention. I tried, as I always do, to just drive on by as if these landmarks mean nothing more than that we are about seven minutes away from home. But as I fiddled with the radio and listened to the kids’ chatter in the backseat, I realized that today is June 13—a sunny, hot, perfect late spring Saturday, just as it was six years ago, on June 13, 2009. As I sailed past the cracked blacktop, the basketball hoops and the ragged grassy field, memory caught and dragged me back.

Six years ago today, my daughter Leah was riding her scooter with friends at that schoolyard when the front wheel hit a crack in the blacktop, leaving her to spend the rest of the summer with multiple broken bones and a simmering, depressive anger. I’ve told this story before, in a blog post about losing a summer to boredom and rage, and learning that no matter how older women insist that we must, we simply cannot cherish every moment with young children. I’ve told it in my chapter in the Disquiet Time anthology, in which I recall how a young EMT, lying down on the hot asphalt to start Leah’s IV, embodied God’s grace for me with an immediacy that stories about Jesus rarely do.

For a long time, that day became for me almost symbolic, a gathering point for all of the most painful and hideously unfair ways that a mutated collagen gene can fuck with a life.

But as I drove past the schoolyard this morning, even as I recalled scenes from that day—the cell phone call from Leah’s friend’s dad telling me there had been an accident, the anxious neighbors watching as my child was bustled into an ambulance, the conversations I had with doctors and nurses in the ER trauma room with my head resting on my knees so I wouldn’t pass out—I felt the grip of memory loosen. The cracked asphalt allowed me to pass with only the mildest of tugs.

Leah’s accident was a seminal story of her childhood and our lives with OI, the genetic bone disorder she and I share. But there are so many other stories to tell, so many other days and seasons just as remarkable, and not because of their pain. I struggle with some disability rights rhetoric, particularly with the notion that a disorder like OI is a value-neutral difference to be accepted and celebrated just as we accept and celebrate differences of race, ethnicity, gender, passion, skill, religion, or tradition. I disagreed with the late activist Stella Young, who also had OI, when she argued that nothing about a disabling disorder like ours is an intrinsically Bad Thing. When a scooter fall on flat ground lands a 9-year-old child in the hospital with multiple broken bones and steals away her summer, that’s a Bad Thing. 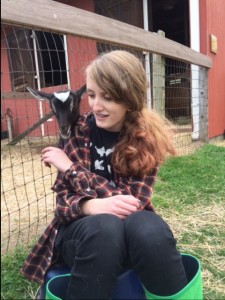 I will always remember that terrible June day in 2009. I will always pass that schoolyard with averted eyes, trying to shield my heart from the assault of hard memories. But I’ve reached a point now where I can breathe a little easier than I used to, hold my hands a bit looser on the steering wheel. I can think of all the other stories I can tell about my girl, and that she can tell about herself, stories that matter just as much as the story of her accident, if not more. I will remember that my faith invites me to tell the better stories.

May 22, 2015
When Love Outlasts Death: Janis Heaphy Durham's "The Hand on the Mirror"
Next Post