Religion and abortion – the facts

Currently hot over at Reddit Atheism is an post from Austin Cline at About.Com Atheism: Abortions Highest Where Religion is Highest. Picking up on Monbiot’s Guardian article, Austin cites the evidence that the abortion rate is lower in countries that are relatively secular (like Northern Europe), and higher in more religious places like Central and South America. The data are from a study that was featured in this blog last year (Abortion in the news – passions run high, facts take a backseat). Austin concludes that:

It’s not secularism, secular ethics, or atheism which causes increases in abortion rates; instead, it’s the heavy hand of puritanical, patriarchal religion in a society where women are gaining power, equality, and wealth.

Now, this is not a statistical analysis – which is something picked up in the comments on Austin’s post. Also, the theory seems to break down with Eastern Europe, where the abortion rate is high despite a secular outlook. I’ve taken a closer look at the numbers, and they reveal an interesting picture!

International data on abortion come from a couple of studies by the Guttmacher Institute (Henshaw et al 1999, and Sedgh et al 2007). One important point is that the numbers include illegal abortions. This is important because the religious often push to make abortion illegal. Previous research (confirmed by the new data show that this has no effect on the overall rate of abortion, but does mean that abortions are done illegally rather than legally. The other thing to realise is that the data are only available for regions, not countries. This is because the researcher used a variety of techniques to estimate illegal (and sometime legal) abortion rates, based on at times patchy data.

For religiosity, I used a measure based on the frequency of prayer (actually the log of the mean frequency of prayer) derived from two sources – mostly from the 4th wave of the World Values Survey (2005) but supplemented by data from the International Social Survey.

So, on with the show! Firstly, what do the numbers actually say? Well, as you can see from the figure below, in most parts of the world the good news is that the abortion rate has dropped between 1995 and 2007. Most notably, there’s been a massive drop in the abortion rate in Eastern Europe (which was extremely high in 1995). The exceptions to the general trend is Northern and Southern Africa, where there has been a slight increase.

How do these rates compare to religiosity? Well, for the 1995 data, the surprise is that there is absolutely no correlation whatsoever – this is shown in the figure below on the left. Why is this?

It’s because of Eastern Europe, which has low religiosity and exceptionally high abortion rates. Removing Eastern Europe from the analysis (figure below) shows that the correlation is in fact quite strong. Regions where religion has a powerful hold do tend to have a higher abortion rate. 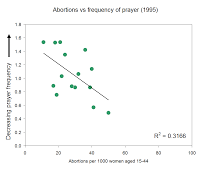 Now, this doesn’t mean that religiosity causes abortion. One important confounding factor is wealth. Wealthier nations are both less religious and also have a lower abortion rate, and it’s impossible to separate the two. Furthermore, it’s possible (indeed likely) that other factors in society, and indeed abortion rates themselves, contribute to psychosocial stress – which is in itself a important driver of religiosity. In other words, rather than religion leading to abortion, it may be that abortion leads to religiosity.

What then, should we make of the case of Eastern Europe? Well, it’s likely that the abortion rate here is affected to a large degree by Russia and the former Soviet Union nations. In 1987, the Soviet Union introduced a law that made early-term abortion available to anyone with almost no barriers (no hospital appointment needed, for example). As access to family planning and contraception in the Soviet Union was poor, early-term abortion was used as a means of family planning, and as a result the abortion rate soared (Ketting, 2005).

So, what can we conclude from this? Yes, countries that are more religious do indeed have higher abortion rates, and it’s probable that this is because when the religious get hold of the reins of power they introduce policies that lead to more abortion (usually highly dangerous illegal abortions). Why? Because the best way to reduce abortions is to reduce unwanted pregnancies. And the best way to do that is high quality sex eduction and easy access to contraception.

By the way, if you’ve made it this far and still think the post is worth sharing, why not head on over to the Reddit Atheism section and give the post a thumbs up. You can give it an ‘up vote’ by clicking on, um, the up arrow. Go on, you know it makes sense 🙂

Ketting, Evert. “Why do women still die of abortion in a country where abortion is legal? The case of the Russian Federation.” Entre Nous 2005 59;20.

October 10, 2008
Scientific errors in the Bible - an expert speaks
Next Post

October 12, 2008 Atheists are more intelligent, but does intelligence lead to atheism?
Recent Comments
0 | Leave a Comment
Browse Our Archives
get the latest from
Nonreligious
Sign up for our newsletter
POPULAR AT PATHEOS Nonreligious
1

Of Hybrid Embryos, Human Rights, and...
Roll to Disbelieve
Related posts from Epiphenom

Creationism failed, again, in Arkansas. But don’t fist-bump...
Creationism will not be twinned with "creationist theory" in Arkansas public-school science...

'Rev Ernest Angry' is 'in heaven with his...
TELEVANGELIST Ernest Angley, above, the butt of many jokes because of his...
view all Nonreligious blogs
What Are Your Thoughts?leave a comment
Copyright 2008-2021, Patheos. All rights reserved.
error: Content is protected !!