Atheists are more intelligent, but does intelligence lead to atheism? 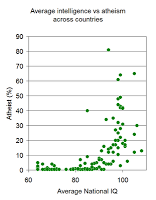 The Telegraph has picked up on a story (People with higher IQs are less likely to believe in God, according to a new study) that was actually broken by Times Higher Education back in June (High IQ turns academics into atheists). I checked the journal – Intelligence – but the paper (although accepted) is still not yet published. But there is a word version of it on the web, so we can take a look to see what it actually says.

Essentially the authors (chief among them Richard Lynn, who has some rather controversial views on race and intelligence) have put together a compilation of the very large number of studies that show, in one form or another, that intelligent people also tend to be less religious or less likely to believe in god. They can be summarized like this:

These numbers are persuasive. The argument that atheists are, on average, more intelligent than believers seems to hold across a range of conditions. It’s not as controversial as it sounds. The big, unanswered question is why? Lynn says this:

Many rationalists no doubt accept the argument advanced by Frazer (1922, p.712) in The Golden Bough that as civilisations developed “the keener minds came to reject the religious theory of nature as inadequate … religion, regarded as an explanation of nature, is replaced by science” (by “keener minds” Frazer presumably meant the more intelligent). Others have assumed implicitly or explicitly that more intelligent people are more prone to question irrational or unprovable religious dogmas. For instance, some sixty years ago Kuhlen and Arnold (1944) proposed that “greater intellectual maturity might be expected to increase scepticism in matters of religion”. Inglehart and Welzel (2005, p.27) suggest that in the pre-industrial world, humans have little control over nature, so “they seek to compensate their lack of physical control by appealing to the metaphysical powers that seem to control the world: worship is seen as a way to influence one’s fate, and it is easier to accept one’s helplessness if one knows the outcome is in the hands of an omnipotent being whose benevolence can be won by following rigid and predictable rules of contact…one reason for the decline in traditional religious beliefs in industrial societies is that an increasing sense of technological control over nature diminishes the need for reliance on supernatural powers”.

In other words, if you are smarter, then you can figure out that all this god stuff is nonsense. An attractive argument if you are an atheist, and perhaps true to some extent – but on the other hand it is probably largely wrong.

For a start, look at the graph of IQ versus belief, and focus on nations with a mean IQ of around 100. In these nations, there’s almost no correlation between IQ and belief. The apparent connection comes mostly from a gaggle of nations that are characterised by high levels of belief and low IQ. And, importantly, these are all low-income nations. We already know – and Lynn acknowledges – that increasing material wealth in Western Nations in the 20th century lead to increasing IQ. Does this have anything to do with it?

And what about within nations? Those data showing that individuals higher up the social scale have lower levels of belief? These people are not the same as individuals with lower IQ, since they have more control over their lives and are largely free from money and health worries.

And this is the elephant in the room. The thing that connects all these apparent correlations between religiosity and intelligence is a third factor. Something that is fundamentally important as a cause of religious belief, and something I bang on about on this blog quite frequently: that a secure life equals a life in which people can free themselves from religion. Zuckerman, the guy who put together the data on national rates of atheism that Flynn uses, explains it like this:

One leading theory comes from Norris and Inglehart (2004), who argue that in societies characterized by plentiful food distribution, excellent public healthcare, and widely accessible housing, religiosity wanes. Conversely, in societies where food and shelter are scarce and life is generally less secure, religious belief is strong. This is not a new theory (Thrower, 1999). For example, Karl Marx (1843) argued that people who suffer in oppressive social conditions are apt to turn to religion for comfort. Sigmund Freud’s (1927) central thesis was that belief in God served to comfort humans in the face of earthly pain, suffering, and death. However, Marx and Freud provided no data. Norris and Inglehart (2004) do.

Now, Lynn must’ve read this, so it’s curious that he leaves it out as a potential explanation. But then, as I mentioned earlier, the guy has a controversial approach to evidence!

October 15, 2008 Who are the atheists?
Recent Comments
0 | Leave a Comment
Browse Our Archives
Related posts from Epiphenom