Atheism and IQ: explained by “The Savannah Principle”?

The correlation between atheism and IQ is being talked about again because the study I blogged about last year (by Richard Lynn) has just been published. PZ Myers simply dismisses it – there’s no correlation at all, he thinks (although he hasn’t read the paper). 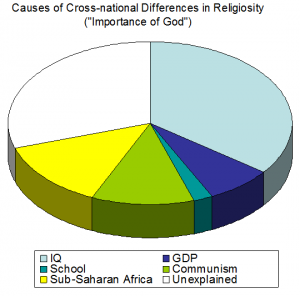 But there’s another, rather more interesting paper out on the topic. It goes further than Lynn by actually trying to take into account some of the other factors that could explain the correlation.

The author, Satoshi Kanazawa, is an evolutionary psychologist from University College London with some fairly controversial ideas. One of these is what he calls the ‘Savannah Principle’.

The idea behind the Savannah Principle is that we have a range of cognitive biases that adapted us for survival in small groups of hunter gatherers, but which are maladaptive for modern life. The controversial bit is that he goes further than that, claiming that people with high IQ can over-ride their evolutionary heritage.

He claims that intelligence is linked to accepting ‘correct’ but evolutionarily counterintuitive ideas. In his new recent paper, he shows that nations with higher average IQ have higher tax rates and lower income inequality, which suggests that people in these countries are more willing to redistribute wealth to people unrelated genetically. What’s more, he shows that higher IQ is linked to less polygamy.

And he also shows that high national IQ is linked to less religion.

Kanazawa concludes that people with a high IQ are more able to overcome our innate, in-built tendency to invent god-like beings.

That’s all well and good, but the devil is in the detail. IQ is strongly influenced by environment, and it’s quite possible that those environmental influences also affect religion. The web of cause and effect can be pretty complex.

Kanazawa controls for a number of factors, shown in the figure above. Even after taking into per capita GDP and years of education, IQ remains a potent correlate of religiosity.

But I think that there is a factor he’s left out. It’s well known that, although high national wealth predicts less religion, the connection is not as tight as you might expect. Back in 2004, Norris and Ingelhart showed that wealth distribution is key. Nations with highly unequal wealth distribution are more religious.

In fact, I have a paper due for publication which shows that income inequality is a powerful predictor of religiosity even after controlling for a number of other factors, like GDP, urbanisation, and religious pluralism.

Since Kanazawa has found a link between IQ and income inequality, this immediately begs the question of cause and effect. Is it that high IQ leads to low income inequality and low religion?

Or is it that democratic, homogeneous nations are more likely to invest in other people. As a result, they are more able to develop intellectually and also are more secure (leading to less religion)?