A new, integrated theory of the social factors that make people religious

A new, integrated theory of the social factors that make people religious May 25, 2009 Epiphenom 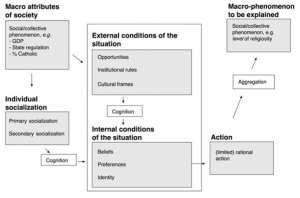 This one’s new out in the British Journal of Sociology. There’s no shortage of ideas about why religion is more important to some people, and some regions of the world. All of them have a certain amount of evidence to back them up, but none is really comprehensive.

Jörg Stolz, at Lausanne University, has put forward a model that integrates most of the major strands of thought regarding how culture creates individual religiosity.

Essentially, what the model assumes is that a person’s environment – the society they live in, as well as their more immediate environment (the attitudes of their parents, for example) – create individual situations, which in turn generate an individuals actions.

This is a broad model, and all of the factors that are conventionally used to explain differences in religiosity can be incorporated within it. So how well does it work? Stolz tested it by looking at the relationship between macro and individual factors across Swiss cantons.

What he found broadly supported the role of individual factors in generating religiosity. Having a religious upbringing had the strongest effect, perhaps unsurprisingly. This was based on parent church going, whether both parents were of the same denomination, whether the individual had undergone the rite of confirmation, and the number of years of religious education.

A less significant factor was ‘regulation of demand’. This was derived from how urban the place was where the individual lives, and how many religious people live there. If you live in a secular town, you’re less likely to be religious yourself.

The macro-level variables didn’t have much effect at all. Importantly, regulation of religion (i.e. local laws restricting or promoting particular religions) had no effect, contradicting one of the major current theories. Neither did state spending on ‘secular culture’ (museums, art galleries and the like), which in theory might tempt people away from religion.

What did make quite a difference was the religious culture – people living in Catholic cantons were more religious than those living in Protestant ones.

Stolz also looked at what might explain ‘alternative’ religiosity – the sorts of New Age religions and mysticisms. Only wealth had any detectable effect (poorer people were more mystic).

And a final interesting nugget from this study was the significant effect of age (for Christianity, although not alternative religion). It’s well know that older people are more likely to be religious, but there’s ongoing controversy about whether this is simply because they were more likely to have been brought up religious.

Well, this study controls for that, and still finds an effect of age. This suggests that there really is something to being older that increases religious feelings. It could be an effect of facing up to your own mortality, or it could be that older people are often not as wealthy (perhaps they gain more from a religious community). Or it could even be cognitive decline. Or perhaps some mixture of all three!

May 22, 2009
A leaflet from my friendly neighbourhood fascists
Next Post

May 28, 2009 Do religious immigrants send more money home?
Recent Comments
0 | Leave a Comment
Browse Our Archives
get the latest from
Nonreligious
Sign up for our newsletter
POPULAR AT PATHEOS Nonreligious
1