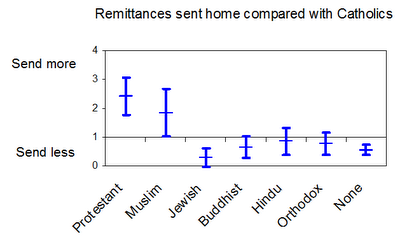 Remittances sent by immigrants to their home country are an important source of income for poorer nations. Does religion matter? Do religious people send home more than the non-religious? There’s quite a few reasons to expect that they might.

They might send more in the hope of getting a supernatural reward. They might come from cultures that emphasize familial ties. They might face more social pressure (from their co-religionists) to send money home. And of course it might simply be that folks who like to indulge in public acts of charity are also the ones who want to be a member of a religious group.

That’s what Claudia Kelly and Blen Solomon, Economists at Grand Valley State University, set out to prove (interestingly, both are immigrants: Claudia was born in Jamaica and Blen in Addis Ababa). They analysed a 1996 survey of newly permanent residents in the USA.

You wouldn’t guess from reading their conclusions that their hypothesis was disproven.

Here’s what they concluded:

Now all this is true, but it’s not the whole story. The full picture jumps out at you if you plot the data – something they didn’t do in their paper. What the figure shows is the amount of remittances sent home compared with Catholics. The lines give an indication of how uncertain the estimate is (they show the standard error). As a rough rule of thumb, if the lines of two different groups overlap, then there probably is no difference between them.

You can clearly see that the remittances sent home by atheists are actually not that different from those sent home by Jews, Buddhists, Hindus and Orthodox Christians.

And what about religious attendance? This is exactly where you would expect to find the biggest effect. The most devout should send the most home, regardless of their religion. The fact that there was no significant effect demolishes the hypothesis they put forward. As they say in there conclusions, the actual number is positive, but the magnitude is so small and the variance is so high that this is almost certainly a chance effect.

In other words, they have some really interesting data here, but completely fail to pick up on that because they’re so wrapped up in their preconception that religion should increase remittances.

So what is going on? What’s so special about Protestants?

Well, it could be that this was a statistical fishing expedition. They threw all the data into the pot in the hope that something would pop out. If one religious group – any one – remitted more than non-religious, then they would consider their hypothesis proven. With 8 groups tested, there was a good chance that one of them would come out higher, just by chance.

Then too, this was a complex multivariate regression. They threw a lot of variables into the pot. There could have been some interactions that made the results unintelligible. For example, according to their results immigrants from Africa and the Middle East were particularly reluctant to send money home. This seems unlikely. Perhaps this might help to explain why Muslims and Protestants came out tops (because people from Africa and the Middle East are likely to be Protestants or Muslims).

But perhaps most tellingly, their analysis doesn’t take into account the socioeconomic status of the migrants. If you’re a professional from a wealthy family, as atheists and Jews tend to be, you would be less likely to have to support your family in your home country.

Put together with the fact that religious service attendance does this clinch the proposition that religiosity has no effect on remittances sent home by immigrants? I think it does.

Kelly CS, & Solomon B (2009). The influence of religion on remittances sent to relatives and friends back home. Journal of Business and Economics Research, 7 (1), 91-100

May 25, 2009
A new, integrated theory of the social factors that make people religious
Next Post