Psychologists are the least religious of American Professors

May 30, 2009 by Epiphenom
0 Comments
Psychologists are the least religious of American Professors May 30, 2009 Epiphenom 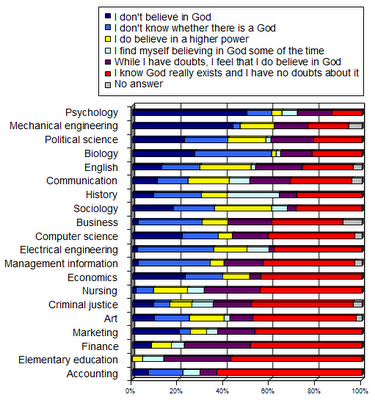 Fifty percent of professors of psychology at US universities and colleges do not believe in any god, and another 11% are agnostic. That makes them the least religious of a pretty heathen bunch.

The data come from Politics ofthe American Professoriate study, a survey carried out inthe spring of 2006 and published yesterday in the journal Sociology of Religion. The researchers, Neil Gross of the University of British Columbia and Solon Simmons of George Mason University, surveyed nearly 1500 full-time college and university professorsteaching in U.S. institutions.

The results are reminiscent of a 2007 survey which found that psychiatrists were the least religious of physicians. It seems that there’s something about studying how the mind works that makes people skeptical of the God delusion!

Gross and Simmons looked into the link between academic field and religion in some detail. Here’s what they concluded

Lord knows why mechanical engineers are so irreligious!

Another factor that separates nonreligious professors from the religious is whether they actively engage in research, or just teach.

That might either be because they consciously reject religion as a result of their commitment to science, or it might be because religious people choose other careers.

Regardless, one thing this survey does is further demonstrate that academics are less religious than the general population. Overall, 9.8% said they don’t believe in any god, and 13.1% said they didn’t know.

Which is about three times the proportion of atheists and ‘don’t knows’ as found in the general population!

May 28, 2009
Do religious immigrants send more money home?
Next Post

June 1, 2009 Globalisation makes a more moral society? An excerpt from 'The Evolution of God'
Recent Comments
0 | Leave a Comment
Browse Our Archives
Related posts from Epiphenom