Scientific studies into the effect of religion on behaviour make heavy use of priming studies. Basically, these studies test the effects of a subliminal flash of a religious word. If behaviour changes, then that’s taken as evidence that religion causes the effects.

The message that comes out of these studies tends to be that these subliminal prompts have all sorts of interesting effects, and are probably rather more important than what the test subject says they believe.

Question is, though, are these laboratory studies at all relevant to real life?

Christianity offers an interesting case study. For most Christians, there’s a regular, weekly surge in the amount of religious priming they’re exposed – every Sunday, at church.

So it’s interesting to take a look at Christian behaviour in the real world. There’s been a couple of interesting studies recently, both of them (strangely enough) out of the Negotiations, Organizations, and Markets Unit at the Harvard Business School.

… a 1 percent increase in the proportion of people who report regularly attending religious services is associated with a 0.10 percent reduction in the proportion of purchases that occur on Sunday. This analysis suggests that, on the whole, those who attend religious services shift their consumption of adult entertainment to other days of the week, despite on average consuming the same amount of adult entertainment as others.

The second was a rather clever study by Deepak Malhotra – (Working Paper, available here). He collaborated with a US firm that runs online charity auctions. As the auction closes, the participants get an automated email encouraging them to up their bids.

What Malhotra wanted to know was whether changing the text of that email could change how much people bid. So he changed the text of the email to include a line that appealed to the bidders sense of charity:

“We hope you will continue to support this charity by keeping the bidding alive. Every extra dollar you bid in the auction helps us accomplish our very important mission.” 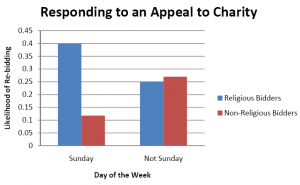 And when you remove the prime, both religious and non-religious people are equally charitable. Which is exactly what the laboratory studies conclude.