Now that’s an interesting one. There was a control phrase used in the study, and the results from that one open up another small can of worms. Here it is:

“The competition is heating up! If you hope to win, you will have to bid again. Are you up for the challenge?” 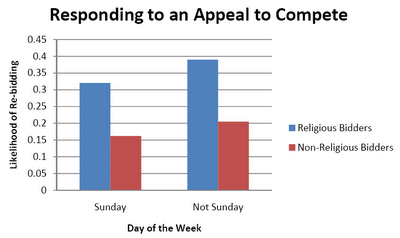 So this one appealed to the bidders’ sense of competition, rather than their sense of charity. And the graph shows what happened. A couple of comments:

First, both groups showed a small drop in the bidding on Sunday. That suggests that, on the whole, people have better things to do on a Sunday than online charity auctions. But the drop for the non-religious wasn’t as big as the drop we saw in response to the appeal to charity. So it seems that an appeal to charity really might turn religious people off if you make those appeals on a Sunday.

In other words, if you want to get maximise the contributions from this religious group, at least, you are better off with an appeal to their competitive instincts, rather than their charitable ones!