Why some countries are more religious than others

July 8, 2009 by Epiphenom
0 Comments
Why some countries are more religious than others July 8, 2009 Epiphenom

After nearly two years of blogging on other people’s peer-reviewed studies, it’s a refreshing change to now be blogging on one of my own! My paper, Is Personal Insecurity a Cause of Cross-National Differences in the Intensity of Religious Belief?, is now out in the Journal of Religion and Society (pdf).

The paper is a statistical analysis of the causes of religiosity at a national level (in other words, the core characteristics of a country that help to explain how religious its population is). The motivation for this was triggered by a couple of conundrums.

Firstly, studies done looking at people within a single country generally conclude that religious people are more pro-social. But back in 2005, Gregory S Paul published a study which seemed to show that, at the national level, the opposite happens. The more religious a country is, the worse is its ‘Societal Health’.

Secondly, although it’s commonly assumed (at least by atheists) that increasing wealth and all that goes with it (science, education, communication) is gradually eroding religion, there are some glaring anomalies. The most spectacular is the USA, which is both one of the wealthiest large nations and also one of the most religious.

Could these two be connected? They would be if societal ill health is an important factor in making people more religious, and if wealthy nations are not equally effective in improving the lot of their citizens.

There were some intriguing hints already out there. As I explained in an earlier post, it was already known that nations with higher welfare spending and lower income inequality were less religious.

So I set out to test whether this idea really could compete with the conventional theories on why nations differ in their religiosity. Here’s the two hypotheses that the paper tests:

I should explain here that by religiosity I mean the intensity of beliefs, as measured by how often people pray, rather than how often they go to church or anything else. Religion is a complicated, multifaceted beast. So results that hold for one measure (frequency of prayer) might not hold for another.

I pulled together data on frequency of prayer from over 50 countries, and found that countries where people prayed more frequently had lower life expectancy and scored lower on the Peace Index. They also had higher infant mortality, homicide rates, and levels of corruption, and had more AIDS and more abortion. That’s pretty conclusive. 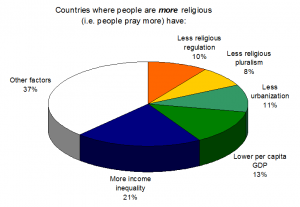 The next step was to compare the importance of income inequality as a cause of religiosity with the standard theories of why some countries are less religious. These are modernization (as measured by per capita GDP and urbanization) and regulation (both governmental and social pressures on the free expression of religious beliefs, as well as religious pluralism).

The pie chart shows the relative importance of these factors in explaining country differences in religiosity. As you can see, both modernization and societal health (income inequality) are powerful, whereas regulation is less so. Overall, about 60% of the variation between countries is explained. 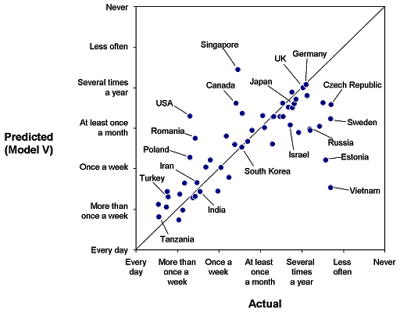 How does this map out? Well, using this model you can plot the predicted level of religiosity, based on just 5 key factors (income inequality, GDP, urbanization, religious pluralism, and government regulation) against the actual levels.

It does a pretty good job. Across a wide variety of national cultures, from the Far East to sub-Saharan Africa to Europe, most countries have pretty much the same level of religion as the model predicts. The USA is still a bit of an outlier, but that’s a topic for another post!

The take home is this. The standard theories of religion seem to work. The more you regulate religion, the more you turn people off it. The more you modernize the country, the more people abandon religion.

Rees, TJ (2009). Is Personal Insecurity a Cause of Cross-National Differences in the Intensity of Religious Belief? Journal of Religion and Society, 11