The dependence of religion on dysfunctional societies

The dependence of religion on dysfunctional societies August 3, 2009 Epiphenom 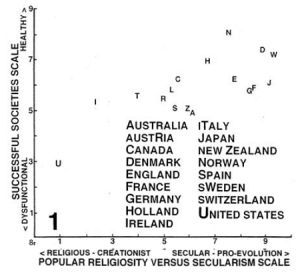 This is a timely new study by Gregory Paul. Back in 2005, he published a controversial paper showing that religious societies seem to be more dysfunctional. In a paper just published on Evolutionary Psychology he takes this argument a stage further and adds a bit of statistical rigour.

The cornerstone of the paper is the ‘Successful Societies Scale”, which is constructed from 25 separate indicators – things like murder and suicide rates, prison population, mortality, sexually transmitted diseases, abortions, marriages, deaths, alcohol consumption, poverty and unemployment.

There’s a clear, statistically significant relationship – worse societies are more religious. With different measures of societal health and a different group of nations (only wealthy ones), this nicely corroborates the conclusion I reached in my independent analysis published last month. 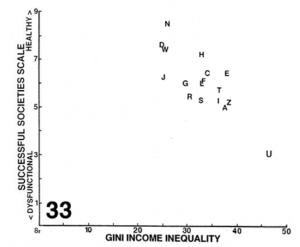 My analysis used income inequality as a proxy measure of societal health. The interesting thing about Paul’s new ‘Successful Societies Scale’ is just how well it correlates with income inequality (that’s shown in fig 33, shown on the right here). 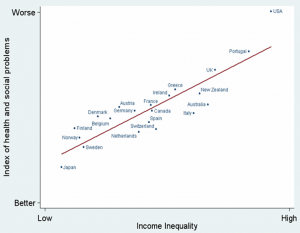 And just to cap it all, here’s another figure, from a new book by Richard Wilkinson and Kate Pickett, The Spirit Level. They use their own multi-component measure of societal health, and also find a close correlation with income inequality.

In other words, income inequality really does seem to be a good barometer of how stressful and downright dangerous society is. And that, in all likelihood, is probably why it correlates so strongly with religiosity.

August 6, 2009 The happiness smile
Recent Comments
0 | Leave a Comment
Browse Our Archives
get the latest from
Nonreligious
Sign up for our newsletter
POPULAR AT PATHEOS Nonreligious
1

John Ortberg: The Scandal That Just...
Roll to Disbelieve
Related posts from Epiphenom