Earlier this year I blogged about a study done by Luke Galen, a psychologist at Grand Valley State University. Well, he’s now written an account of it in Free Inquiry – you can download it free here.

One fascinating finding is some evidence that contradicts the widely held assumption that religious people are happiest. What he points out is that, because studies on happiness usually include few atheists, they are often lumped in with the ‘undecideds’.

But what his study suggests is that it’s precisely these fence-sitters who are the unhappiest. People who are firm in their convictions – either firmly religious or firmly non-religious – tend to be happier. Here’s how Galen puts it:

When we distinguished strong varieties of nonbelief, such as atheism, from weaker nonbelief, a curvilinear relationship emerged (see Shaver, Lenauer, and Sadd). Those nonbelievers most confident in their nonbelief tended to be the most emotionally healthy, relative to the “fence sitters” who reported more negative emotions. Similarly, life satisfaction was lower among the spirituals relative to the other three belief labels. Therefore, having uncertainty regarding one’s religious views appears to be associated with relatively greater emotional instability.

Now, the problem with Galen’s study is that it’s not a random sample of nonbelievers. He recruited members of the Center for Inquiry, who by their nature are going to be ‘joiners’ rather than loners. 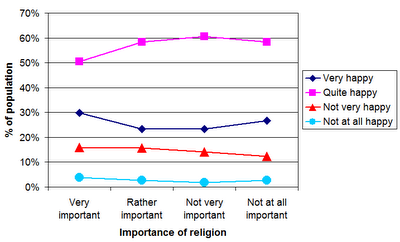 So I took a look at the World Values Survey. This survey took in over 50 countries, and is a random sample of people in those countries. Among a range of questions they asked how happy people were, and how important religion was in their lives.

I lumped together all the responses from all the countries to get this chart of happiness by ‘importance of religion’.

Take a look first at the people who are ‘very happy’. Sure enough, people for whom religion is not at all important are more likely to be very happy than people in the middle (although people who are religious devotees come out top).

But look at the ‘Quite happy’ line. It’s the mirror image! So being firm in your convictions has the effect of shifting you from being quite happy to very happy. But it doesn’t seem to have much effect on people who are unhappy.

Now, this is a very top-line analysis. No doubt there are all sorts of demographic reasons that might explain these patterns (they’re probably linked to gender and social status, for a start).

But I think the important take home is that the naive belief that more religion = more happiness needs to be challenged.

By the way, the study website is here, but still under construction! 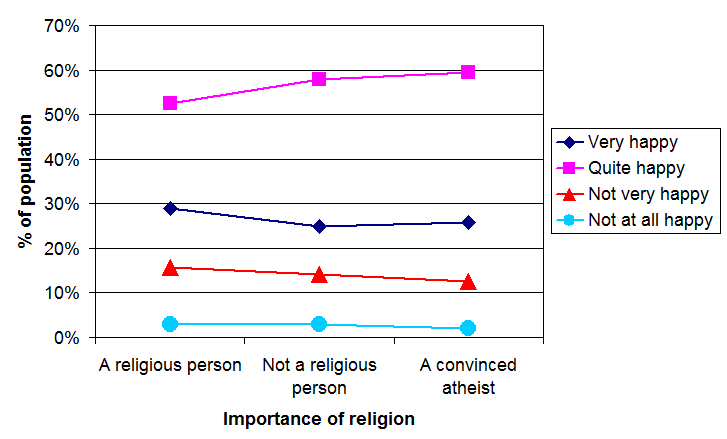 Edit: I added a new figure. Basically the same, but divides people according to whether they are religious, not religious, or a confirmed atheist.

August 3, 2009
The dependence of religion on dysfunctional societies
Next Post

August 10, 2009 Violence against women, religion, and the dark underbelly of statistics
Recent Comments
0 | Leave a Comment
Browse Our Archives
get the latest from
Nonreligious
Sign up for our newsletter
POPULAR AT PATHEOS Nonreligious
1