How come Intelligence, religion, and fertility are linked?

How come Intelligence, religion, and fertility are linked? February 20, 2010 Epiphenom

Here’s a new study looking at the connection between religion, fertility, and IQ at a national level. We know from previous studies that countries where people are, on average, more religious also tend to have higher average fertility and lower average IQ.

The problem is that we also know that countries that have lower average IQ also have higher fertility. So teasing out the two factors is not obvious.

This is what Charlie Reeve (University of North Carolina Charlotte) has investigated. 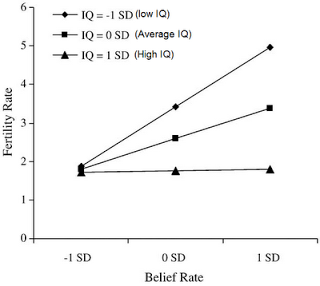 What he found was that, even after correcting for per capita wealth, both religion and IQ were independently related to fertility. What’s more there was a fascinating interaction.

Reeve also took a look at other health-related measures, and found a similar effect. Religiosity and low IQ combine to push up both infant mortality and maternal mortality. 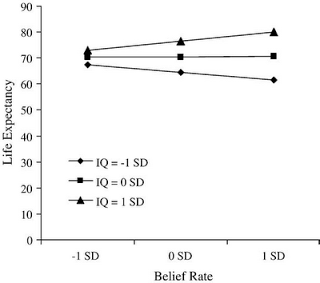 What could be going on here? Well, it’s pretty hard to figure out. A simple explanation is that IQ is a buffer against the effects of religion. However, my gut feeling is that there is some other factor mediating the interaction.

Variations in national average IQ probably reflect other social and cultural factors – access to education, for example, as well as democratic and open societies. It may be that religion has a particularly big effect in nations lacking these structures.

One of these factors is our old friend wealth inequality. There does appear to be a relationship between inequality and IQ, perhaps mediated by education.

That said, we do have to treat these results with caution. They don’t show that individuals with low IQ and high religion have more kids (although I wouldn’t be surprised if that was the case), only that countries with this mix have high fertility. And we can’t be sure how robust the results are – I suspect there are very few countries in the ‘high IQ + high religion’ category.

What’s more, the measures of IQ and religion are non-standardised. IQ especially is very susceptible to cultural bias. Reeves does try to reduce this by redoing the analysis after cutting out the countries with very low IQ, but doesn’t present the results (only reports that they are essentially the same.

Still, this is a very provocative paper. What it suggests is that, in wealthy nations, religion is not so important as a determiner of fertility. That certainly seems to be the case in Europe.

February 23, 2010 Should we entrust children to the care of the devoutly religious?
Recent Comments
0 | Leave a Comment
Browse Our Archives
get the latest from
Nonreligious
Sign up for our newsletter
POPULAR AT PATHEOS Nonreligious
1

Nonreligious
A sense of mystery results from the brain...
Epiphenom
TRENDING AT PATHEOS Nonreligious