We condemn more when we think we’re being watched

We condemn more when we think we’re being watched July 21, 2011 Epiphenom

In a nice new study, Pierrick Bourrat (at the University of Sydney) and colleagues have shown that people are more likely to judge others severely when they are given even subtle hints of being watched.

The set-up was simple. The subjects (recruited from the Campus Universitaire de Jussieu in Paris) had to read a tale of a minor misdeed – finding a wallet in the street and keeping the cash, or falsifying a resume – and then judge how morally wrong it was.

The twist was that half the subjects had a picture of flowers on their paper, while the other half had a small picture of a pair of eyes peering at them (the same ones as are peering at you right now). 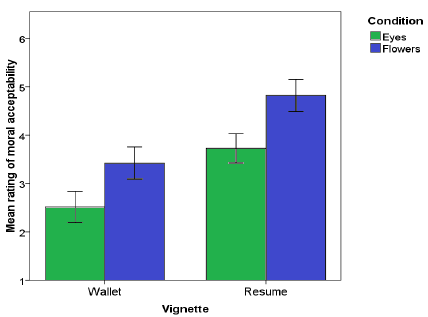 For both scenarios, the subjects exposed to the eyes were more judgemental. It seems that when we feel we’re being watched, we’re more likely to say that we’re condemning others. Now, this has all sorts of interesting implications not related to religion – which I’m not going to talk about! You can read the paper if you’re interested (it’s free, and quite short – link below).

So could it be that the tendency for the religious to be more condemnatory is a by-product of their sense that they are being watched? And if that’s so, what are the implications?

July 25, 2011 Why do more children die when Pentecostals are around?
Recent Comments
0 | Leave a Comment
Browse Our Archives
get the latest from
Nonreligious
Sign up for our newsletter
POPULAR AT PATHEOS Nonreligious
1