Atheists are a pretty disliked bunch of people in North America. Most atheists will be aware of polling data that puts them at the bottom of the loathing pile.

Question is, what’s driving that loathing? Will Gervais (University of British Columbia, Canada), who’s previously published some fascinating research into this topic, is back with some more research (co-authored by another couple of names familiar to this blog: Azim Shariff and Ara Norenzayan).

Gervais’ basic hypothesis is that prejudice against people who are not part of your group can be driven by different fears. For example, White Americans fear Black Americans, but view homosexual Americans with disgust. Gervais puts that together with another idea that many people have – that fear of supernatural punishment makes people more honest – to hypothesise that people dislike atheists specifically because they distrust them.

To test this, they took advantage of a clever psychological trick. Here is its original form (invented by Nobel prize-winning psychologist Daniel Kahneman), as described recently in The Guardian:

Linda is a single 31-year-old, who is very bright and deeply concerned with issues of social justice. Which of the following statements is more probable: a) that Linda works in a bank, or b) that Linda works in a bank and is active in the feminist movement? The overwhelming majority of respondents go for b), even though that’s logically impossible. (It can’t be more likely that both things are true than that just one of them is.) This is the “conjunctive fallacy”, whereby our judgment is warped by the persuasive combination of plausible details. We are much better storytellers than we are logicians.

In Gervais’ twist on this classic study, students at the University of British Columbia were told about Richard. Here’s Richard’s story:

Richard is 31 years old. On his way to work one day, he accidentally backed his car into a parked van. Because pedestrians were watching, he got out of his car. He pretended to write down his insurance information. He then tucked the blank note into the van’s window before getting back into his car and driving away.

Later the same day, Richard found a wallet on the sidewalk. Nobody was looking, so he took all of the money out of the wallet. He then threw the wallet in a trash can. 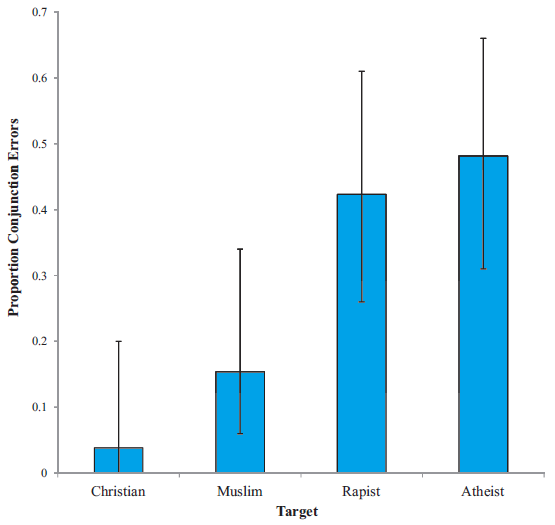 Well, the chilling results are shown in the graphic. Atheism was up there with rapist as an intuitive fit to Richard’s character. Atheists? Don’t trust ’em!

Gervais and co ran another study, in which half the students were given a different version of Richard. This Richard is not untrustworthy, but he is disgusting (with horrible, flaky skin and snot all over him).

They found that that the disgusting Richard was not associated with atheism (or, indeed, with homosexuality – even though they found in a different study that homosexuals evoke disgust).

What this and some other studies they did showed is that the reason atheists are disliked is specifically because they are distrusted.

They also found that the degree of this distrust is governed by the strength of belief that supernatural monitoring helps to enforce good behaviour. Those who believe this are most likely to distrust atheists.

So although lack of familiarity with atheists increases distrust, it seems that the root of this distrust is not simple fear of the unknown, or even fear about moral corruption, but rather a genuine and seemingly deep-rooted fear that people will not behave well unless they have an invisible policeman watching over them.

Which probably says rather more about these Christians than it does about atheists!

December 1, 2011 Why do the religious give to charity: learning from Taiwan
Recent Comments
0 | Leave a Comment
Browse Our Archives
get the latest from
Nonreligious
Sign up for our newsletter
POPULAR AT PATHEOS Nonreligious
1