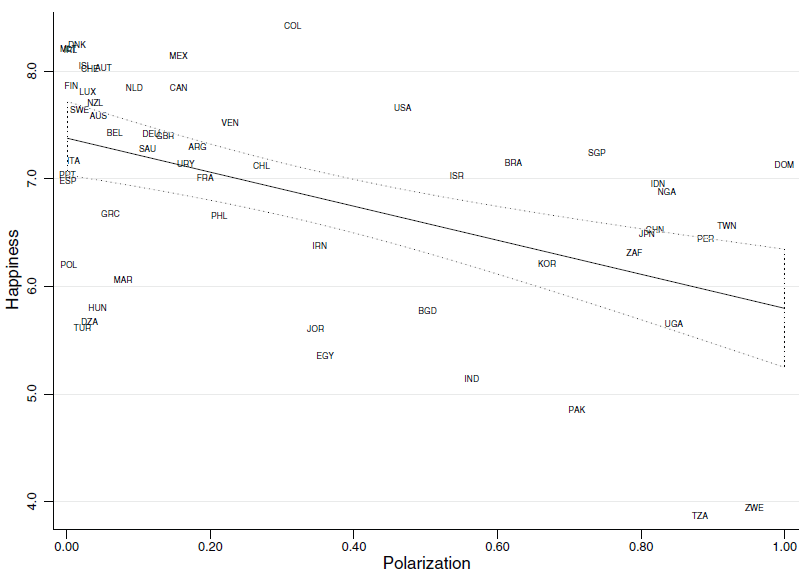 Most people – certainly most atheists – would say that one of the biggest problems with religion is that conflict you get when religion divides people who share a particular part of the world. Of course, there are plenty of examples of conflicts where religion plays a role. However, there is surprisingly little statistical evidence either way.

Part of the problem is in trying to define religious diversity. The method most commonly used in sociological research was developed by Alberto Alesina, an economist at Harvard, and is called ‘Fractionalisation’. This computers a number between 0 and 1, which is basically the odds that two people picked at random have the same religion (or race, or whatever else you are looking into).

The problem is that this kind of diversity may not be the diversity that’s important here. If everyone had their own personal religion well then, society would indeed be diverse – but it probably wouldn’t trigger mass conflict.

An alternative measure is something called ‘Polarisation’. The more evenly a country is divided into two major groups, the higher its polarisation will be.

Adam Okulicz-Kozaryn, a sociologist at Harvard, has used both of these measures to see how they interact with life satisfaction (Okulicz-Kozaryn last featured back on this blog in 2009, Happy worshippers, unhappy believers).

The effect got stronger when he took into account other factors that can affect unhappiness, such as age, marital status, and national wealth.

Once you account for the positive and negative direct effects of religion on personal happiness, then it becomes clear that religious diversity is linked to increased unhappiness. And that’s true whether you measure relisiong as Fractionalisation or as Polarisation.

It’s a big effect, too, as Okulicz-Kozaryn says:

…if a country’s fractionalisation index goes up by 0.25, say from the level of 0.57 for Japan to 0.82 for the United States, then life satisfaction for everybody in a country would drop by 0.25 on scale from 1 to 10. This is a big effect – it is similar to shifting 5% of a country’s population from the mildly satisfied category (6) to most dissatisfied category (1). In case of Japan it would be six million people

He’s careful to point out that this does not mean that religious diversity is a bad thing. For example, other factors that encourage diversity (openness to other cultures, freedom of speech and expression) could increase happiness.

But it does support the belief that many people have: that religion can often serve to reinforce and even create barriers and mutual suspicion.

November 15, 2011
Does Christianity make mere thoughts into crime?
Next Post