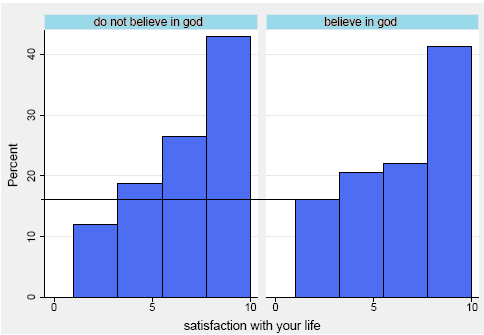 Adam Okulicz-Kozaryn, a social scientist at Harvard, has been looking at religion and happiness around the world. What he’s found is really quite remarkable. 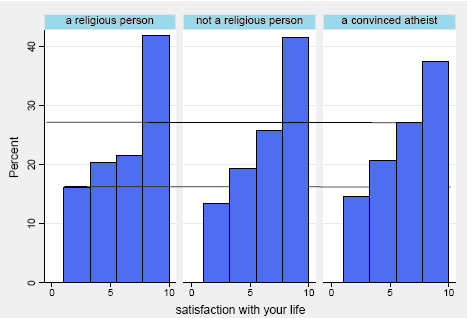 First, some background. Previous studies, mostly done in religious countries like the USA, have tended to find that religious people are, on average, happier (in fact, what’s usually measured is ‘life satisfaction’, since happiness is difficult to compare across cultures).

But simple ‘average’ levels of happiness obscure a lot of detail. Earlier this year, Luke Galen showed that, even in the USA, convinced non-religious people tend to be quite happy. It’s the people who are uncertain about their beliefs who are dissatisfied with life.

Okulicz-Kozaryn has used some fairly sophisticated tools to analyse data from the World Values Survey. Here’s the key things that he’s found.

Religious people are both happier and unhappier. In other words, they tend to be found at either extremes of the happiness scale.

Religious service-goers tend to be happier. Teasing apart the data in more detail in a multilevel analysis that takes into account all sorts of national-level factors (wealth, democracy, corruption etc) and individual-level factors (personal income, health, education, number of friends, recreational activities, etc) shows that people who go to religious services and belong to religious organisations are happier.

Non-believers tend to be happier. In the same analysis, people who believe in god are much less happy. In other words, the happiest people are those who take part in the social side of religion but don’t take all the god stuff too seriously.

Now this is a very important finding. It suggests that the reason non-believers are generally found to be less happy is because the studies have usually been done in countries where they are the minority.

He speculates that there is greater social stigma to unemployment in rich countries, and that religion alleviates the misery that this causes.

All in all, some fascinating stuff. It confirms that the religions causes extremes – both high happiness but also high unhappiness. Plus, happiness is mostly linked to social activities.

Most importantly, this study explains the conundrum of why atheist countries, like those in Scandinavia, consistently rank among the happiest. Atheists are happy among like-minded people, and the societies in which they predominate are also rich in the other factors that make people happy – freedom, justice, and equality.

November 23, 2009
International trends in religious belief and participation
Next Post