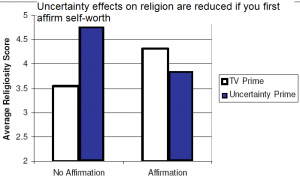 A series of studies over recent years have found that if you make people feel uncertain or anxious, they’ll respond by turning up the intensity of their religious faith.

Quite why this happens isn’t known. It might be that unhappy people turn to their gods. Or it might be the implicit threat to their well being that’s triggering the response.

Enter a new study by Aaron Wichman at Western Kentucky University. He used a paper-based task to induce feelings of uncertainty in two groups of undergraduates (he got them to write about a time when they were uncertain).

In the first study, he then got them to write about a time when they had succeeded at something (or, in the control group, when they had failed). The results are shown in the top graph.

The only significant effect was in the group that had to write about a time they were uncertain about something, and then about a time when they had failed. This group had their religious beliefs strengthened.

Wichman concludes that uncertainty “does not result in defensive responding when individuals are given the opportunity to repair self-worth”. 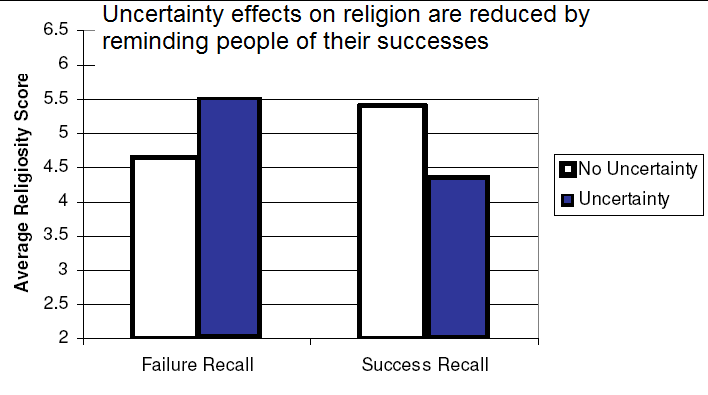 Then he got them to do the uncertainty task (well, half were in the control group that just did a general writing task about TV watching).

What’s doubly interesting is that the results weren’t affected by how happy or sad people were. It seems that it’s not that uncertainty makes people unhappy, it’s that it makes then feel threatened – and that’s why they turn to religion.

And you can eliminate this effect by first bumping up their self worth!