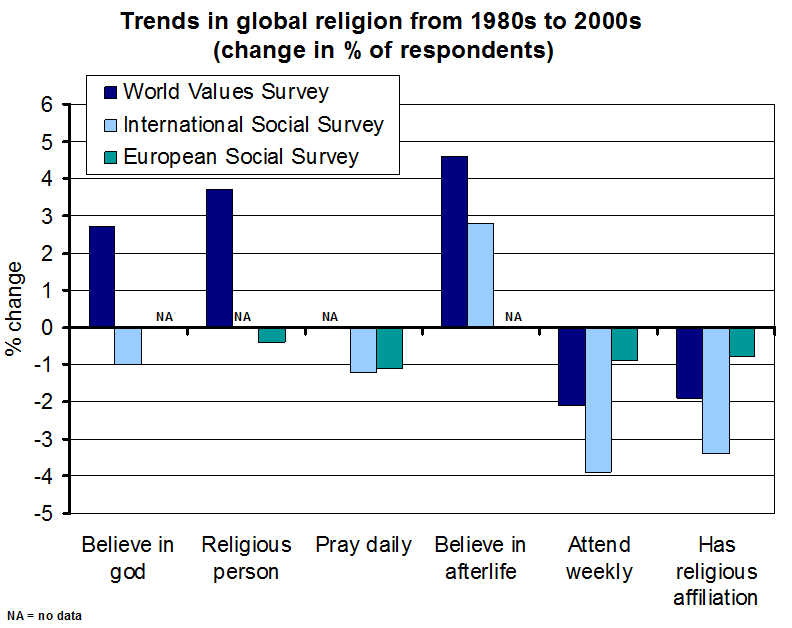 If anybody has a handle on global religious trends, it should be Tom Smith, co-founder of the International Social Survey. He’s just produced a report, Religious Change Around the World, that summarizes trends gleaned from opinion survey results around the world

Well, I say summarized, but the full report is 346 pages! OK so the beef of it is in the first 16 pages – the rest of it is a torrent of data. So let me summarize it a bit more for you.

The graph shows trends of some of the key measures of religion from the major surveys – the World Values Survey, the International Social Survey, and the European Social Survey.

The data are from Table 15 in the report, and I have to warn you that it’s a bit of a bodge job. The data on religion over time are patchy at best. And what Smith has done here is a simple average across countries – they aren’t weighted for population, so Belgium counts as much as India.

What’s more, these survey over-represent the wealthy nations. If anything, you would expect that to produce a bias in favour of a global increase in religion. That’s because these countries start out less religious than average. The countries that aren’t in the survey, on the other hand, tend to start out at the top end of the religion scale, so there’s not much scope for them to go up.

And the national trends are all over the place. Some countries are up, and some countries are down. So the average trend doesn’t tell you anything about what’s happening in any one country.

Even so, there seem to be some interesting global trends. It looks like more people say that they believe in god or the afterlife, although fewer pray every day. But the number of people actively participating has slipped, and fewer people claim a religious affiliation.

Over on Science+Religion Today, Smith talks about what might be behind this apparent drop in religious membership:

Partly this is due to the fact that, over time, governments and other institutions have taken over many of the societal roles that religions used to dominate (e.g. state welfare programs vs. alms for the poor). Partly this is due to religion becoming more individualized and less institutional. And partly, it is due to the fact that society in general has changed more rapidly than religions have.

November 26, 2009 Happy worshippers, unhappy believers
Recent Comments
2 Comments | Leave a Comment
Browse Our Archives
get the latest from
Nonreligious
Sign up for our newsletter
POPULAR AT PATHEOS Nonreligious
1