Does religion actually make any difference? By that I mean, does the brand of religion that takes hold in a particular region (Islam, Buddhism, Animism etc) actually change the culture in any meaningful way.

Of course, we know that there are real, measurable differences between adherents of different religions. But is that caused by the religion, or is it simply that cultures differ and that the local religion moulds itself to the local culture?

Adam Cohen, at Arizona State University, thinks that religion can change culture, and he’s written an excellent, plain English introduction to his research in the open-access journal “Readings in Psychology and Culture”.

So, for example, he found that Christians were more likely than Jews to believe that a man who thinks adulterous thoughts has done something wrong. And not just adultery either – there were similar differences of opinion over a student who fantasises about poisoning his Professor’s dog after getting a bad grade.

In another test, he asked Jews and Christians to:

Imagine a son, Mr. K., who does not like his parents very much, because they have very different personalities from him. That son can either pretend to like his parents, or he can ignore and neglect them. If he doesn’t like his parents inside, does it mean anything for him to behave nicely toward them? 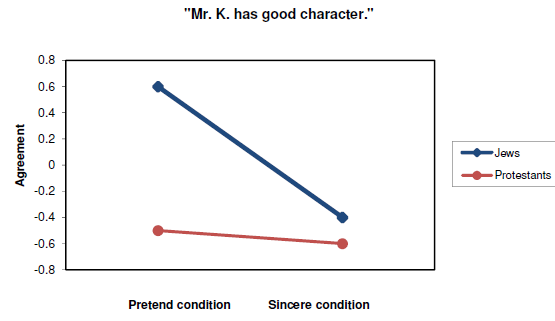 As the figure shows, Jews and Christians see Mr. K the same if he both inwardly dislikes his parents and also neglects them in reality (the ‘Sincere condition’ in the graph). But Jews, in contrast to Christians, were much more likely to think favourably of Mr K if he pretends to like his parents.

Cohen attributes these differences to differences in their respective holy books. For example, Jesus explicitly condemns thought crime (“You have heard that it was said, ‘You shall not commit adultery.’ But I say to you that everyone who looks at a woman with lustful intent has already committed adultery with her in his heart.”). In contrast, Cohen says,

…the Jewish attitude is that it is better to override your temptations out of obedience to God. True virtue is doing what God says even if you don’t internally want to.

All of this puts me in mind of George Orwell’s novel, 1984, in which he wrote about thoughtcrime:

The thought police would get him just the same. He had committed – would have committed, even if he had never set pen to paper – the essential crime that contained all others in itself. Thoughtcrime, they called it.

Now, Orwell was an atheist, and his book had a pretty big impact on me when I was a kid. All of which set me to thinking: is thinking bad thoughts a crime for atheists, or are they more like Jews? Even more interesting, are Atheist Jews different from Atheist Christians in this regard?

There is one study out there, which I wrote about last year, which found that Protestants were more likely than Atheists to conflate thinking and doing (Protestants tempt fate, but atheists don’t!)

I’d love to hear your perspective, though. Should you feel guilty about thinking nasty things someone and then lying to them? Is that kind of dishonesty bad? If not, why not?

November 11, 2011
In the West, religious nations are more sexist
Next Post