Apparently, some people think that talking or merely thinking about an event can actually bring it about. To me, that’s incomprehensible. When I was young, I assumed that the concept of “tempting fate’ was a poetic metaphor. Imagine my surprise when I discovered that some people take it literally!

Jonathan Abramowitz and colleagues, at the University of North Carolina, have done a nice little study into the differences between Protestants and nonbelievers in attitudes towards tempting fate. Technically, this is actually ‘thought-action fusion’ – a cognitive bias that occurs when people believe that thinking is equivalent to doing, and that thinking can make certain events more probable. It’s related to obsessive-compulsive disorder.

What they did is to sit people down and ask them to think about a close relative. Then they were presented with two sentences which they had to copy, inserting the name of said relative:

Then they were asked about how the task made them feel, was the thought morally wrong, did it make them anxious, and did they think the event was more likely to happen as a result? All this was rated on a 1-100 scale.

The Protestants thought the sex thing was very wrong (giving it 98), the nonbelievers less so (only 81). But neither group thought it was going to happen, even though the thought had been seeded. 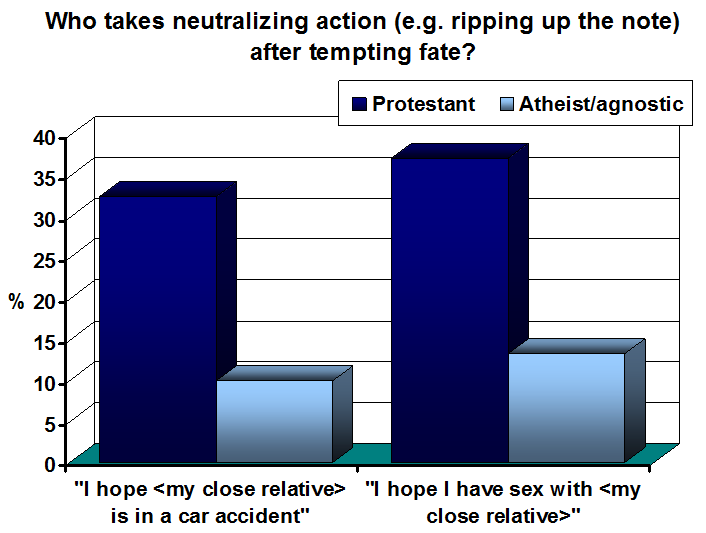 For the car accident, things were different. Here the Protestants felt twice as strongly that merely thinking about it made it more likely to happen.

After the test, the participants were told that they could do anything they wanted to reduce or cancel the effects of writing or thinking about the sentence. The results were fascinating.

As you can see in the graph, the Protestants were much more likely to try to neutralise the words – typically by doing things like tearing up the paper, scribbling over the words, or flipping the paper over.

The researchers think this is because Christian theology encourages thought-action fusion. It crops up in many popular bits of the bible – like the commandment against coveting, and Jesus’ warnings that lust is the same as adultery and that hating your brother is equivalent to being a murderer. What’s more, other studies have found that more religious people do indeed show more thought-action fusion.

But I’m not so sure. I suspect it’s the other way round. To me, it seems more likely that this is yet another of those cognitive predispositions that just make religion seem more plausible. I suspect that the reason I am an atheist is that this way of thinking about the world just seems downright alien to me.

May 25, 2010
Science can't prove that! How rejecting evolution leads to rejecting science
Next Post