Did fornicating Farm Girls boost the rise of atheism in Britain?

Did fornicating Farm Girls boost the rise of atheism in Britain? May 31, 2010 Epiphenom

These days, Britain is one of the most atheistic countries around. It wasn’t always like that, of course, but one of the problems with trying to work out how the present state of affairs came about is that there are very few statistics on religion the stretch back far enough. 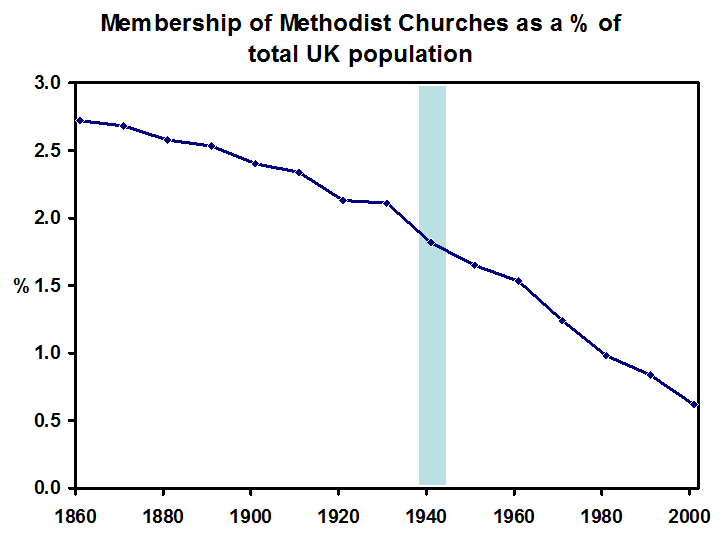 Stepping into the breach is Steven Bruce and Tony Glendinning, of the University of Aberdeen in Scotland. They’ve put together a time-series from data collected by the Methodists Churches, who have been among the most rigorous in collecting data on their membership.

If you look at the raw numbers, it looks at first sight as though Methodist membership held up quite well – at least until recent decades. But over that same period of time, the total population of the UK nearly trebled.

When you plot membership as a percentage of the total population, a different picture emerges. Methodist membership has actually been declining since records began, with the decline accelerating in the post-war period decades.

Broadly similar patterns (with a few hiccups) can be seen in many other measures of religion in the UK (although inevitably more murky because the data are more patchy). Overall church membership peaked around 1904, Sunday School enrolment peaked in the same decade, and baptisms peaked around 1930. 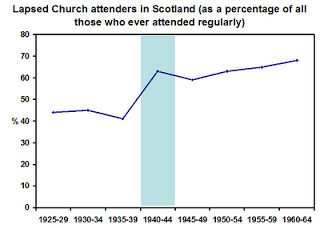 What caused this decline? Well, membership goes down when the churches lose members – either to death or defection – faster than they can recruit. And the evidence suggests that the major reason for the decline is failure to bind children into the religion of their parents.

This really kicked off during the Second World War. Here’s another graph, showing showing the percentage of people in Scotland who stopped attending, according to when they were born. Mostly these are people who went to church as children, but who stopped attending before they turned 21.

There was a sudden surge in the numbers of people who stopped attending, which started for people born during the war and persisted afterwards.

The Second World War caused an enormous upheaval in European society, and trying to trace any one factor as the cause of the rise in godlessness is problematic. However, one clue is that a major reason for young adults to abandon Christianity is having parents from different denominations.

In other words, its much more difficult to pass on religion to your children if parents have different views – even if those differences are as minor as the differences between Anglicans and Methodists.

Now, add to this the fact that the War brought a revolution in the social mobility of women. Young women broke free from their traditional roles, and by 1943 90% of single women aged 18-40 were employed either in the armed forces or in industry.

Many women found themselves posted to areas of the country far from home, often with others – both men and women – of very different social backgrounds. And with that came not only a broadened outlook but also sexual emancipation. One ‘Land Girl’ working in Romney Marsh recalled:

There were troops everywhere. You could just take your pick. You didn’t know how many were married; you just had to take their word for it. . . . I had several boyfriends during the war. . . . It was a case of a broken heart one night and the next night a new boyfriend’

One result of this freedom was that women born between 1914-1924 were twice as likely to have had sex before marriage than women born 10 years before. But, perhaps more importantly, both men and women were exposed to perspectives on the world that they would never have gained previously.

According to Bruce & Glendinning, the war weakened the community ties that help the successful transmission of any shared cultural characteristic:

With vast numbers of young men in the armed forces being moved around the country, one way or another, almost all single British women between 1939 and 1945 experienced an unprecedented degree of social mixing. A large part of the eligible population had a chance to engage in pleasant and positive social interaction with people from very different social, regional, cultural and religious backgrounds (Harris 2000: 113). Not all such mixing resulted in a broadening of horizons and a weakening of previous loyalties. The aliens – inner-city evacuees, servicemen, foreigners – could be handy scapegoats for those who saw no benefit from the disruption of old ways of life but for many of those whose children were to form the missing generation of church members in the 1960s, the war was a liberating experience.

As a result, women were less likely to marry the local lad from the same street and church. And it’s the mixing together of different world views and perspectives that is fatal for the successful transmission of religion.

June 3, 2010 Children can tell the difference between science and religion
Recent Comments
0 | Leave a Comment
Browse Our Archives
get the latest from
Nonreligious
Sign up for our newsletter
POPULAR AT PATHEOS Nonreligious
1