Science can’t prove that! How rejecting evolution leads to rejecting science May 25, 2010 Epiphenom

Recent studies have shown that, at least in the USA, science and religion don’t really mix. Religious people tend to have worse understanding of science, and scientists are, of course, far less religious that the general population (probably because they start out that way, before they ever get to university).

We also know that religious people are much more likely to reject evolution. You think there’s a connection here? Well, no doubt. But new research suggests that the connection runs deeper than you might assume.

Geoffrey Munro, of Towson University in Maryland, has shown that people who are confronted with scientific evidence that conflicts with their beliefs are more likely to reject science as a source of evidence. Rather than modifying their beliefs, they move the goalposts!

What he did was to show undergrads some brief research summaries that had been tweaked so that the results either supported or refuted the notion that homosexuality is linked to mental illness. Of course, for some of these undergrads the ‘research’ they were shown conflicted with their beliefs, and for some it supported their beliefs.

Then they were asked about what information sources they would turn to to help them decide about whether the US should have the death penalty. They could choose from scientific research (into whether or not it reduces violent crime, what the cost to taxpayers was, etc), or from a variety of other opinions: from crime experts (judges, prison wardens), or moralists (religious leaders, philosophers), families of victims, or supporters or opponents of the death penalty. 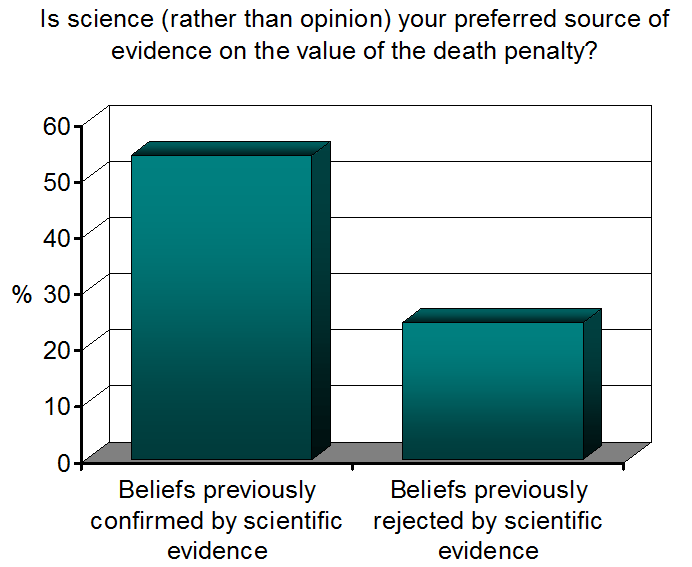 The results were clear. People who had just read research that conflicted with their beliefs about homosexuality were less likely to see the value of science in helping them decide about the death penalty.

This fits in with the attitudes of the religious towards evolution. There are a large number of Americans – some 30%, if you crunch the numbers -who understand the theory of evolution, but they simply reject it because it conflicts with their beliefs.

If Munro is right, then the inevitable consequence is that these people will also become sceptical of science in general.

And in case you’re wondering whether these undergrads changed their beliefs towards homosexuals at all as a result of the scientific research they were shown (whether it conflicted or agreed with those beliefs), then the answer is “no”. Not a jot!