Studying science doesn’t make you an atheist… but studying literature does!

May 15, 2010 by Epiphenom
0 Comments
Studying science doesn’t make you an atheist… but studying literature does! May 15, 2010 Epiphenom

Chris Mooney has an interview with Elaine Ecklund, the researcher who’s been documenting the religious beliefs of academics for several years. I’ve blogged about her work last year. 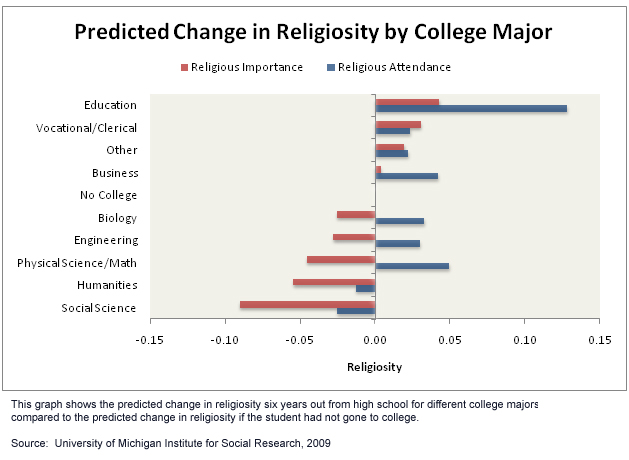 One of the things Mooney picks up on is her conclusion that, although scientists are much less religious than the general population, it doesn’t seem to be that studying science is the cause. That’s because prospective scientists are mostly non-religious in the first place.

I guess that’s not too surprising. There’s a considerable anti-science movement within conservative Christianity, so highly religious people are less likely to go into science in the first place. And there’s no reason to suppose that learning about science should necessarily conflict with liberal religion. After all, mainstream religions have successfully accommodated science within their worldviews (often reconstructing God as a remote figure who lets evolution and the laws of physics do most of the work – although see this earlier blog post for more on that).

And yet there is something odd going on here. Because college in the US is, in fact, a major non-religious epiphany for many students.

Take, for example, data from the ongoing Spirituality in Higher Education Study. This study is following nearly 15,000 students through their college years.

They’ve found that religious attendance plummets during college years – as shown in the figure on the right (which I nicked from the Salt Lake Tribune). According to the study organizers, this drop in attendance is closely related to an increase in “alcohol consumption and partying”. A shocking indictment of college life, I’m sure you’ll agree!

But it’s not just the hedonism and freedom of college life that entices students away from religion. You can see this in some remarkable data from the Monitoring the Future Study (the paper is here, but behind a paywall).

The data are shown in the graph at the top of this story. Basically, for the biological and physical sciences it’s a mixed picture, similar to what Ecklund found. Church attendance goes up, while beliefs go down. Perhaps that’s because, as they join the workforce, they feel under increased pressure to conform socially.

For vocational subjects, the effect is all positive. These folks come out of college more religious than you might expect – which may reflect the different natures of the colleges that teach these subjects.

But both the Humanities and the Social Sciences see dramatic declines in attendance and even more in religious beliefs.

Now, this might simply be because they were more religious to start with – but then, so were those who went into education. So I suspect that broadening world views is the major reason these students lose their faith – a conclusion also suggested by the fact that, in the Spirituality in Higher Education Study, participation in a “study abroad program” also created increased skepticism about religion.

In other words, humanities and social sciences, much more than biological and mathematical sciences, challenge you to imagine the world through the eyes of others. And this exercise in imagination undercuts religious dogma far more effectively than any science lesson can.

As the Michigan researchers conclude: “”Our results suggest that it is Postmodernism, not Science, that is the bête noir of religiosity.”