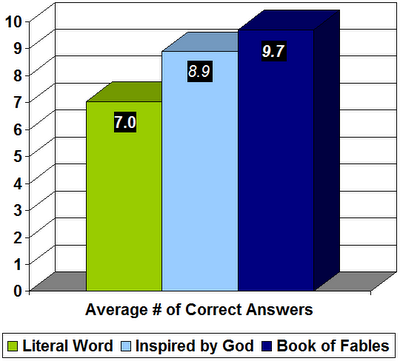 At the back end of 2007, I wrote that science education doesn’t inoculate against religion. But the time has come to indulge in a bit of revisionism.

Here’s why. Darren Sherkat (who has a paper out on religious fundamentalism and verbal ability that I covered in the previous post) has also taken a look at the link with scientific knowledge. The paper isn’t published yet, but he sent me the manuscript – and he’s also blogged it, if you want the ‘horse’s mouth’ version!

As before, this is an analysis of the US General Social Survey, which includes a set of 13 questions on general science topics. As you can see in the graph, people who think the Bible is a book of fables scored nearly 40% higher that those who think it is the literal word of God.

You get a similar result for people who are members of Conservative Protestant sects. What’s more, it persists even after controlling for other factors that might explain the difference – like age, education, income, race, immigrant status and region.

It seems that there is something about conservative Christianity in the US that works directly against science skills. In part, this might be down to the nature of the questions.

Sherkat omitted from the analysis the question about evolution, but there are also questions about continental drift and also the Big Bang. A Young Earth Creationist, might give the wrong answer to these even though they had been taught the correct answer.

So why did I previously suggest no link between science proficiency and religiosity? Well, I looked at international student scores on science collected by PISA, and correlated these with data on how often people in those countries prayed. I didn’t find any link.

But Sherkat’s work suggests that the link is strongest with people who have a rather extreme attachment to their religion. So I went back and redid the analysis, using the latest religious data from the World Values Survey. 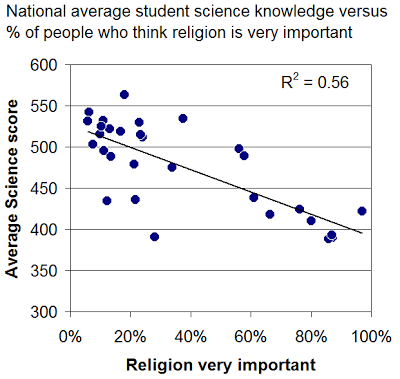 This time I looked at people who rated themselves ’10’ on a 10-point scale asking how important God is in their life. This is a question that really picks out the very devout.

It turns out that countries with a lot of these really devout people do very poorly at educating their children about science.

In a way that’s not too surprising, because these countries also tend to be poorer and less well educated in general.

But PISA also provide data adjusted for socioeconomic differences between the countries. So this score reflects how effective countries are at educating their children on science, after taking into account their different circumstances. 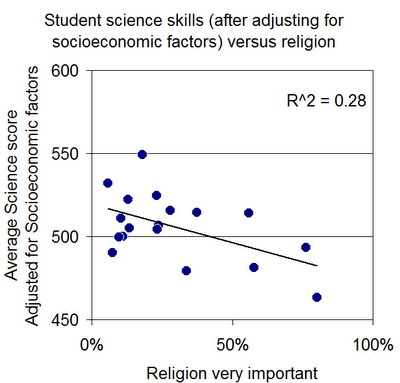 The data are only available for OECD countries, but that’s good because these countries are broadly similar to start with. Unfortunately, the WVS didn’t collect religious data from all OECD countries, which makes the sample even smaller. But even so…

The remarkable fact is that even within this small, relatively homogenous, pool of countries there’s still a significant correlation.

Although this is an ecological study (it didn’t look at individual data, like Sherkat’s can do with the GSS data), it does support his findings.

Either highly religious people shield their children from science, or good science education shifts people from being highly religious to a more moderate stance (or perhaps both, of course).

Either way, I’m going to have to revise my previous belief that science education and religion aren’t linked!