Will the financial crisis turn people to religion?

Well, we have a global financial crisis. We also know that religion is a source of solace for a lot of people. So will the financial crisis mean boom times for religion?

The answer is probably yes, but not in a way that’s straightforward. That’s the message from two new studies, one in the US (which is the topic of this post) and one in Indonesia (which I’ll write up in the next post). The Indonesian one is particularly interesting because it’s not often we get insights into the role of religion outside the Western world.

They took a look at data from the US General Social Survey that was gathered back in 1998 to see whether psychological distress (whether people said they felt restless, hopeless, depressed, etc) was linked to being poverty. And of course they were interested in how this connected with different aspects of religion.

Turns out that, in case anyone doubted it, wealth really does make you happy – or at least less stressed. But although those people stuck at the bottom of the pile in the USA felt more stressed, the effect wasn’t huge – only about 10% of the variation in stress was explained by poverty.

They also found that, in general, people who went to church more often were less stressed. The opposite effect occurs with prayer, though – people who pray more are more stressed (presumably that’s partly why they pray). 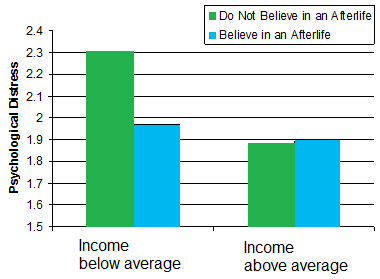 So here’s the big question. Is religion particularly effective in reducing the stress of poor people? The answer to that is yes, but in a surprising way.

Because although overall belief in the afterlife wasn’t linked to less stress, it proved to be the biggest factor in helping the religious poor deal to deal with stress of their situation. Sugarcandy Mountain, anyone?

You can see the interaction clearly in this graphic. Wealthy people are pretty relaxed, whether or not they believe in the afterlife. Those who are poor are more stressed – except for those who have consoling beliefs in the afterlife. In these people, stress levels are reduced to levels similar to that of the rich.

It seems that the hopes of being wealthy in the next life can make up for the reality of this one.

There was a similar effect with religious attendance. Going to Church makes rich and poor less stressed, but the effect is particularly strong among the poor.

Surprisingly, although meditation didn’t reduce stress on average, it did seem to reduce the stress caused by financial hardship. Perhaps this just shows that people who meditate don’t see wealth as a measure of their personal success or social status, and so are unfazed if they happen to be poor.

Unexpectedly, prayer doesn’t help poor people accept their low status. Poor people who pray a lot are just as stressed as those who don’t pray.That’s interesting because an earlier study found that both a belief in the afterlife and prayer help people who have recently had a financial shock.

Perhaps this suggests a certain realism on the part of those doing the praying. If you’ve just recently come into financial problems, you might hold out hope that your God will reverse those problems if you pray.

But once you’ve been stuck in the poverty trap for a while, you may well resign yourself to the prospect that your God is not going to help you – not in this life, at least!

May 15, 2010
Studying science doesn't make you an atheist... but studying literature does!
Next Post