In the West, religious nations are more sexist

In the West, religious nations are more sexist November 11, 2011 Epiphenom 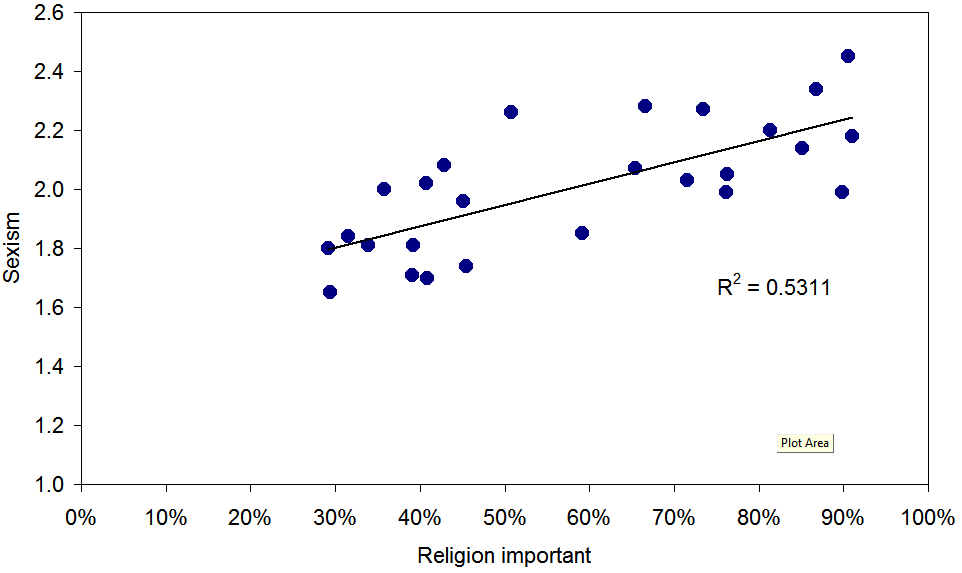 This post is number 57 (I’m guessing!) in our series on “religious countries are…”, in which I run a correlation between the numbers of religious people in a country and some other national characteristic.

This time it’s the turn of sexism. You might expect that religious countries are more sexist, and you’d be right (with one caveats – but I’ll deal with that later).

The data come from Mark Brandt, a sociologist at DePaul University in Chicago. I compared this with the number of people who say that religion is either important or very important in their lives (the data for this come from the World Values Survey).

Overall, there’s a fairly good correlation. But there is an exception, and that’s Asian countries.  There are only a few Asian countries in the sample, so it’s hard to draw sweeping conclusions. But they are all very sexist, whether their citizens are religious (Thailand, Taiwan) or non-religious (China, Hong Kong, Japan)

So I took these countries out of the analysis – in fact, what’s shown in the graphic is only those countries with a predominantly Western, Christian culture (i.e. North and South America, Europe, and Australia).

In these Westernised countries there’s a strong, linear relationship between religion and sexism.

In fact, if you narrow the sample a bit more to look only at European countries the fit is even cleaner (I haven’t shown this, but it’s a remarkably straight line). 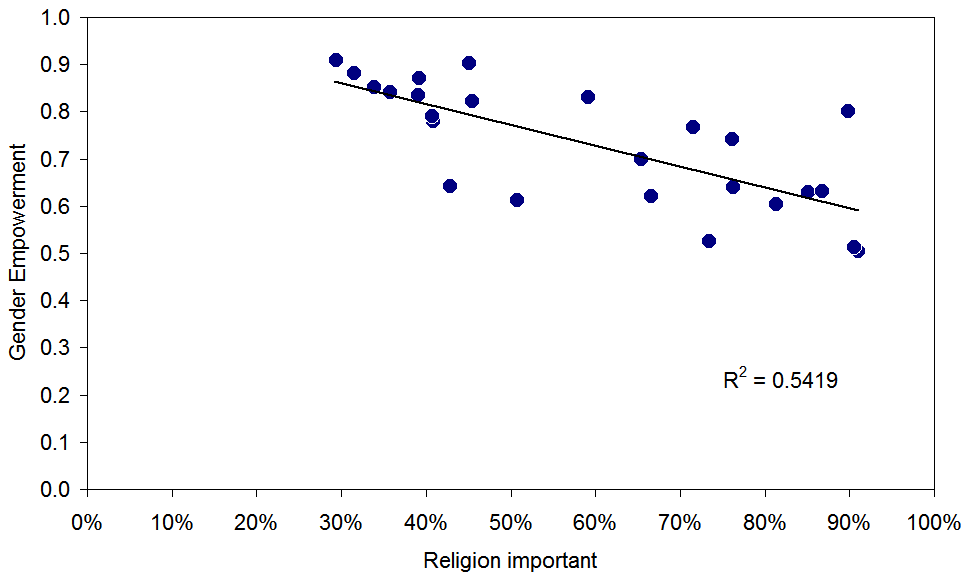 You get pretty much the same results when you look at Brandt’s other measure (the UN’s gender empowerment score). That’s important because this is a measure not of attitudes, but of practical effects. Brandt’s main point in his paper is that sexist attitudes translate directly into sexist practices.

Now, the reason for this, it seems to me, is that religion tends to be tied to ‘traditional values’. What this analysis suggests is that these traditional values can persist in the absence of religion, but that getting rid of traditional religion seems to be a prerequisite for ditching sexism!

November 7, 2011
What kind of insecurity turns Europeans on to religion?
Next Post

November 15, 2011 Does Christianity make mere thoughts into crime?
Recent Comments
0 | Leave a Comment
Browse Our Archives
get the latest from
Nonreligious
Sign up for our newsletter
POPULAR AT PATHEOS Nonreligious
1