Deliver us from temptation (and take care of everything else, too)

According to some new research, your ideas about gods can significantly affect your approach to life. Lead researcher Kristin Laurin (at the University of Waterloo in Ontario, Canada) and colleagues Aaron Kay and Grinne M. Fitzsimons (Duke University) ran a series of priming studies, in which the subjects had to form sentences from scrambled sets of words or read a passage about god as part of a bigger study (so they didn’t cotton on to the fact that they were being primed). By carefully choosing the words, the researchers could subliminally prime the subjects (all undergraduate students) with different ideas about God.

What they were interested to know was whether reminding people about God can make people less interested in actively pursuing goals (perhaps because they think that God will take care of everything for them) or better able to resist temptation (perhaps because they think God is watching them and will frown upon moral weaknesses!). What they found was that both things can happen, although which effect you see depends upon the type of God that you prime.

So, for example, when they primed the students with a passage describing a controlling God who “understands what it is like to be in our shoes”, they found that the students subsequently expressed less interest in signing up to additional study to attain career goals (such as becoming a lawyer, nurse or stockbroker). However, other students primed with the same god concept declared that they were more able to resist the temptation to hang out and have fun with their friends on an evening when they should be studying for an important exam that was a required step in attaining that career.

In other words, if you pump up people’s idea of god as controlling, then they feel more able to resist temptation, but less inclined to work hard to achieve their goals! 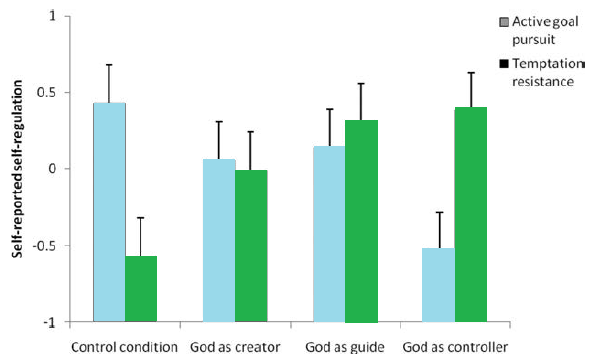 As you can see in the graph, other ideas about god had intermediate effects, compared with the control condition in which the student’s weren’t primed with any god concept at all.

In other studies, they dug into other facets of this relationship. They found that students primed with the idea of god valued achieving just as much, it’s just that they were less inclined to put the effort in.

Participants who had read a short passage about God subsequently ate fewer cookies than did those who had read a control passage about a topic unrelated to God. Resistance to temptation was particularly strengthened in students who read passages describing God’s omniscience.

The researchers conclude that reminders of God can influence real world goals in both positive and negative ways. What the overall effect will be will depend on what exactly the task in hand is – whether it requires self control or the drive to achieve. It also, they say, depends on what kind of God you have in mind: