Eric Kaufmann is a demographer and author of the book “Shall the religious inherit the earth?” Back in 2009 he made some demographic projections for the US and concluded that, by 2050, immigration of religious people and their higher fertility will turn back the tide of secularisation (see Secularisation in the US will be swamped by religious fertility and immigration)

Now Kaufmann has taken a look at Europe. That’s a bit more of a challenge because Europe is such a patchwork, and so good, comprehensive data are not so available.

He finds, as expected, that religion has declined in Europe. It began after WWII in Northern Europe, but only really got underway in Catholic countries in recent decades.

However, in the Protestant countries of Northern Europe, secularisation seems to have bottomed out at around 5% regular Church attenders and 40-50% who consider themselves to be religious (somewhat higher numbers believe in God).

But how to project the future? Well, one aspect is fertility. The religious have higher lifetime birth rates, but on the other hand the young are much more likely to be non-religious – and so have greater potential for begetting.

Then too you have to take into account switching into and out of religion. And here’s where things get interesting. It turns out that Muslims have the highest fertility rates, and also are the most resistant to switching out. 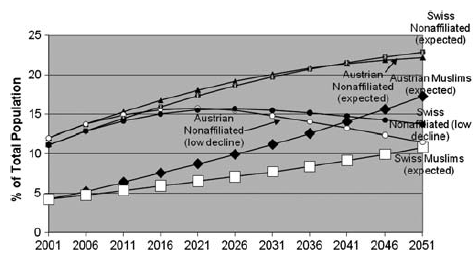 Kaufmann focussed on Austria and Switzerland, two countries with the best data. Here, the non-religious have fertility rates of around 1, Protestants around 1.3, Catholics around 1.4, and Muslims around 2.4.

Plug this into the model and you get what’s shown in the graph, which shows Muslims and non-affiliated in Switzerland and Austria under two scenarios.

Under the ‘expected’ model (which assumes current rates of switching out of religion are maintained), growth of the non-affililiated slows to zero by 2050.

Under the ‘low decline’ model (which assumes, based on the experiences of Northern European Countries, that the rate of switching out will slow to zero), the non-affiliated will actually be in decline as a percent of the population by 2050.

Now, the future is notoriously difficult to predict, and Kaufman lays out some of the many factors that could change these projections:

Major geopolitical changes could ease tension between Muslims and other Europeans; liberalizing theological shifts could pave the way for an increase in the rate of Muslim apostasy. Immigration could become ethnically controlled, as in Japan or Singapore, due to a surge of ethnic nationalism, thereby slowing the demographic growth of religion. A new vogue for family life might narrow the fertility gap between the secular and the religious. These changes would set European religious decline back on its formerly robust course.

One factor that interests me is the idea that a “new vogue for family life might narrow the fertility gap between the secular and the religious”. Because one of the problems with these kinds of analyses is that the religious groups examined are far from homogenous. 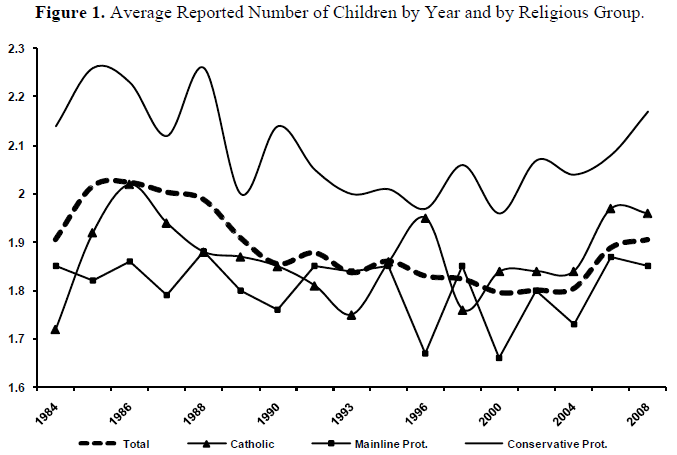 Another recent study, by Casey Borch and colleagues at the University of Alabama, helps to flesh out the picture a little. They split out mainline Protestants and conservative Protestants (aka Fundamentalists).

That’s important, because the fertility rates of the mainline Protestants are only a little higher than those of the non-religious. Conservative Protestants have a much higher fertility rate – the graph shows the trends of fertility over time for the three main religious groups in the USA.

What’s interesting is that, relative to Catholics, the fertility rates of both mainline and conservative Protestants seem to be dropping very slightly. However, somewhat bigger drops are seen among the non-religious and those of ‘other religions’. So the fertility gap seems to be growing.

Will we see something similar in Europe? It’s hard to say. What is known is that the very low rates of fertility seen in the 1990s seem to have been reversed in recent years, particularly in Northern Europe. That’s because many couples chose to delay parenthood, rather than abandon it all together. Yet another complicating factor when trying to figure out fertility trends!

October 23, 2011
Does Chinese culture reflect a lack of monotheism?
Next Post