Inequality drives everyone, but especially the poor, to support religious politicians 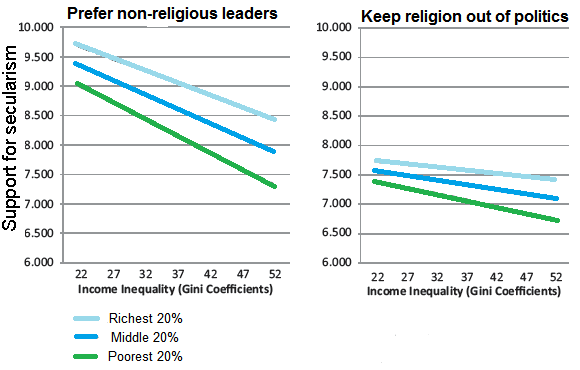 It’s now widely recognised that social and economic inequality is an important factor related to how religious a given society is. But what’s less clear is whether inequality actually increases support for religious politicians – and whether this affects the rich as well as the poor.

Ekrem Karakoç (Binghamton University, USA) and Birol Bașkan (Georgetown University, Qatar) used data from the 2000 World Values Survey to test this relationship. They found that older, less-educated, poorer people, and women, all tended to favour politicians with strong religious beliefs. They also preferred leaders who allowed their religion to influence their decisions.

People affiliated to one of the major religions also supported religious influence in politics. That’s not surprising, but what is surprising is that there was almost no difference among the religions. Catholics, Orthodox Christians, Muslims and Hindus all wanted religious leaders – the only exception was Protestants.

Even after taking all these factors into account, they found that people living in the more unequal societies tended to be more in favour of religious leaders.

Now, the interesting thing is that this was the case for both rich and poor, confirming something similar that has previously been shown. However, the effect was somewhat stronger for the poor, meaning the gap attitudes between the rich and poor does increase slightly as you go from equal to unequal societies.

That’s what you would expect, of course. In unequal societies the poor have less security and so turn to both God and religious organisations to try to obtain that security.

This, then helps to explain why unequal nations are more religious. What is not known, and rather more controversial, is the extent to which this is a reinforcing phenomenon. To what extent does voting for religious politicians actually increase inequality?

October 18, 2012
Why are religious people so fertile?
Next Post