Why are religious people so fertile?

Why are religious people so fertile? October 18, 2012 Epiphenom

On average, religious people have more children than non-religious people. Now, that’s a sweeping generalisation, of course. However, statistically it seems to hold good, to different degrees, for all the societies that I’ve seen examined.

But why? It’s an important question. A common answer is that this is evidence that religion is evolutionarily advantageous. The idea here is that religious belief in some way facilitates having lots of children (perhaps by making you a nicer, trustworthy person), which gives you a head start in the race to pass on your genes to the next generation.

It’s a view that I think is plain wrong.

I think the link is not with religious belief and fertility, but rather with conservative family values and fertility. And, crucially, I think that link is a recent innovation. 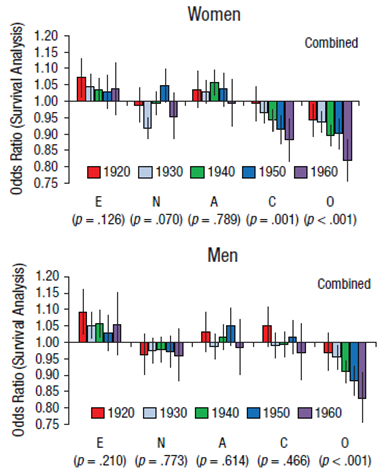 Here’s some new research to back that up.

Markus Jokela, at the University of Helsinki, has analysed the changing relationship between personality traits and fertility in people living in the USA who were born in the decades 1920 to 1960 – a period of huge cultural innovation, especially with regard to women’s rights.

He looked at the conventional “5-factor” model of personality, which rates individuals on their extraversion, neuroticism, agreeableness, conscientiousness and openess.

He found that three of these traits (extraversion, neuroticism, and agreeableness) were consistently related (either positively or negatively) to fertility over time.

However, conscientiousness, and in particular openess, were linked to lower and lower fertility rates as the decades rolled by. That was the case for both men and women.

What this means is that the declining fertility rates seen in the younger groups of people was largely driven by dwindling fertility among people who were highly open to new experiences (as Wikipedia says, these people are “inventive/curious vs. consistent/cautious”).

So, while high fertility among the religious may have implications for the future distribution of ‘religion genes’ (if such a thing even exists), it does not explain the current genetic distribution.

There’s another recent paper that backs this up, albeit in a somewhat more tangential way. Joseph Stanford and Ken Smith, at the University of Utah, have shown that, among Mormons, what we have come to regard as a ‘normal’ link between higher income and lower fertility is reversed.

In other words, Mormons with high income actually have higher fertility than Mormons with lower income. To me, that’s surely a sign that cultural conservatism, which restricts the employment options for women, is a core reason explaining the modern link between religion and fertility.

In the past, of course, everyone was old-fashioned. And so everyone, religious or not, had high fertility rates!

Of course, most children back then died young, but that’s a different evolutionary process at work…

October 14, 2012
Thinking about your soul makes you want to eat junk food
Next Post

October 22, 2012 Inequality drives everyone, but especially the poor, to support religious politicians
Recent Comments
0 | Leave a Comment
Browse Our Archives
get the latest from
Nonreligious
Sign up for our newsletter
POPULAR AT PATHEOS Nonreligious
1