Thinking about your soul makes you want to eat junk food

Thinking about your soul makes you want to eat junk food October 14, 2012 Epiphenom

Mind-body dualism is the belief that the mind and the body are separate – usually, that the mind can exist independently of the body. This kind of thinking is quite common among the religious, of course.

But what are the implications, from a psychological perspective, of a belief that mind and body are independent? That’s what Matthias Forstmann and colleagues, at the University of Cologne in Germany, wanted to discover.

They ran some studies in which they implanted thoughts about mind-body dualism or about ‘physicalism’ (i.e. the idea that mind and body are closely connected). For example, in one study they asked their subjects to read a passage that, they said, was from a textbook they wanted them to review.

When they later asked the students about their attitudes to a range of health behaviours (eating, exercise, hygiene, and going to the doctor’s for checkups), they found that those who had been given the dualism passage were significantly less health conscious. 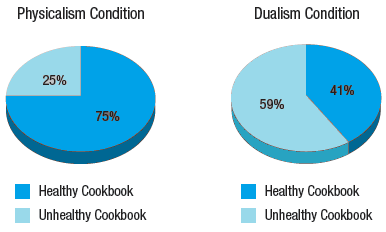 In another study, the subjects were offered a cookbook of their choice as compensation for completing the survey. Those primed with dualism were more likely to choose books on barbecuing or desserts, rather than the books on vegetarian and organic food.

A third study took this to another level. This time, university students were primed either with dualism or physicalism. They were then given some filler tasks, and then told to come back to the lab after lunch to get the results.

Bizarrely enough, those students who had been primed with dualism ate a lunch that was significantly less healthy than students primed with physicalism (by about 1 point on an arbitrary 9-point scale)!

Forstmann thinks that this is because people are less concerned about taking care of their bodies if they think that their minds exist independently. But they also suspect that dualism might be a defensive response to threat.

So, when shown pictures of unhealthy food, we are reminded of our limited lifespan – and react by believing more strongly in the soul!

Forstmann M, Burgmer P, & Mussweiler T (2012). “The Mind Is Willing, but the Flesh Is Weak”: The Effects of Mind-Body Dualism on Health Behavior. Psychological science PMID: 22972908

October 18, 2012 Why are religious people so fertile?
Recent Comments
0 | Leave a Comment
Browse Our Archives
get the latest from
Nonreligious
Sign up for our newsletter
POPULAR AT PATHEOS Nonreligious
1