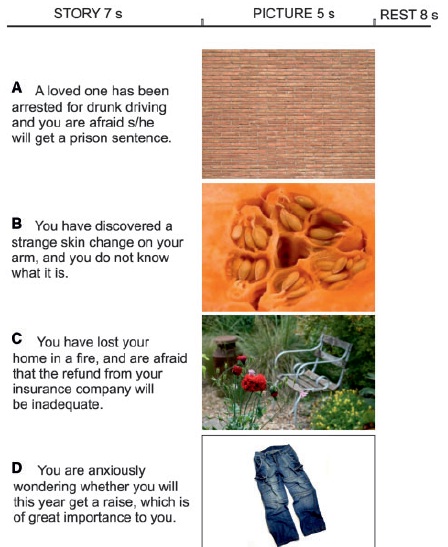 Cognitive inhibition is an important mental skill. Stopping or overriding mental processes, whether conscious or unconscious, is often needed – to suppress unwanted or irrelevant thoughts, to suppress inappropriate meanings of ambiguous words.

In other words, it’s a vital part of staying focussed.

Decreased cognitive inhibition is associated with creativity, but also with with anxiety and neuroticism, feelings of threat and uncontrollability, altered states of consciousness, intuitive thinking and biases in logical reasoning. And this led Marjaana Lindeman, at the University of Helsinki, Finland, to wonder whether a lack of cognitive inhibition also plays a role in supernatural beliefs.

So, along with her colleagues she took a group of 23 sceptics and believers in the supernatural, and put them in an MRI scanner (AKA brain scanner). While in there, they were given some short stories to read, and then a picture to look at – you can see some examples in the graphic on the right.

They were asked to imagine that they were walking along, thinking hard about the particular issue highlighted in the story, then they looked up to see the picture shown. What thoughts would the picture provoke?

Both groups showed brain activity in a region called the left Inferior Frontal Gyrus (IFG). That’s a part of the brain that plays an important role in processing various signs and their meaning, including spoken and written language, sign languages, pantomimes and gestures and other communicative symbols.

However, although the left IFG was activated the same in both groups, the right IFG light up more strongly in the sceptics than in the believers. That’s important, because the right IFG is an area of the brain that is associated with cognitive inhibition.

As you might expect, the believers were more likely than the sceptics to say that they saw the pictures to be sign of some kind – an indication of how the situation was going to turn out. This suggests that the initial associations, made in the left IFG, were not suppressed by the right IFG.

As a result, says Lindeman, this “supports the argument that the skeptics suppressed the potential idea of a supernatural sign in the pictures as irrelevant, while believers did not. This interpretation is in line with previous findings showing that skeptics perform better on inhibitory tasks than supernatural believers do.”

It also fits with earlier research by Lindeman suggesting that supernatural believers get confused when thinking about how the world works.

And she goes on to conclude that:

Although people’s general inclination toward supernatural beliefs may be understood as a form of natural information processing, weak cognitive inhibition may explain why supernatural beliefs are not typical of everybody but especially of, for example, children, old people, creative individuals, intuitive thinkers, people in distress and with mental disorders, as well as during decreased sense of control and altered states of consciousness

In other words, although we are born with hyperactive brains looking for signs and signals, we are not all born believers – because many of us are also born sceptics!

Lindeman M, Svedholm AM, Riekki T, Raij T, & Hari R (2012). Is it just a brick wall or a sign from the universe? An fMRI study of supernatural believers and skeptics. Social cognitive and affective neuroscience PMID: 22956664

October 4, 2012
A love-hate relationship between religion and democracy
Next Post