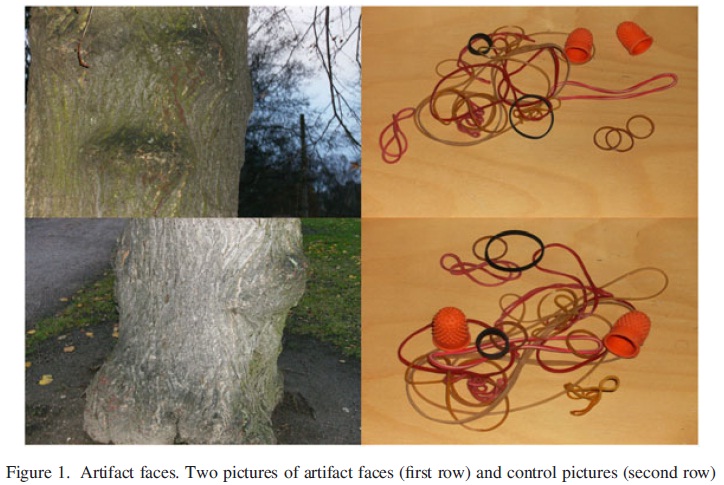 Of all the many human irrationalities, our hyperactive drive to pick out faces in the world around us is one of the most fun. There are whole blogs devoted to it.

Like most abilities, this one varies across individuals. Which lead Tapani Reiki and colleagues, from the University of Helsinki, to wonder whether it is connected to beliefs about the world, in particular paranormal and religious beliefs.

So they recruited 47 people (40% students) who were either strong believers or strong sceptics of the paranormal (e.g., astrology and telepathy).

The paranormal believers were also more likely to be religious, although there was not complete overlap. So they analysed the data after dividing the group (according to paranormal belief and religious belief).

They showed them a series of photos that had previously been judged to either contain faces (for example, the top row in the figure) or not (bottom row). They tried to make the “face” photos as ambiguous as possible – which was, apparently a tough task. A testament to just how strong the drive to face recognition is in humans!

Their subjects had to point to the faces (using a mouse), or say that there was no face in the picture. In a separate study, they were asked to rate how face like a series of pictures were.

They found that  paranormal believers (and religious believers) were more likely to see faces (although the difference was not huge) and rated the faces as being more face like.

Not only that, but believers were more likely to see faces overall – even in pictures where independent raters had concluded there were none!

But what this study adds is that it shows that they are also better at locating the face in a picture (as well as just saying whether or not there is one). Reiki suggest that this effect might be related to social perception and empathy, and that:

…these beliefs, like anthropomorphism, stem from the capacity to recognize and understand human beings. Theoretical arguments and empirical findings suggest that paranormal and religious believers stretch universally and early developing human attributes, such as beliefs, desires, and intentional purpose, to inappropriate realms.

While that’s a possibility, it doesn’t explain why paranormal believers also pick up on non-human patterns.

So these data also fit with the view that believers in the paranormal are just confused in general about how the world works – a hypothesis supported by earlier research from the University of Helsinki.

October 22, 2012
Inequality drives everyone, but especially the poor, to support religious politicians
Next Post