Hare Krishna devotees are prone to jump to conclusions 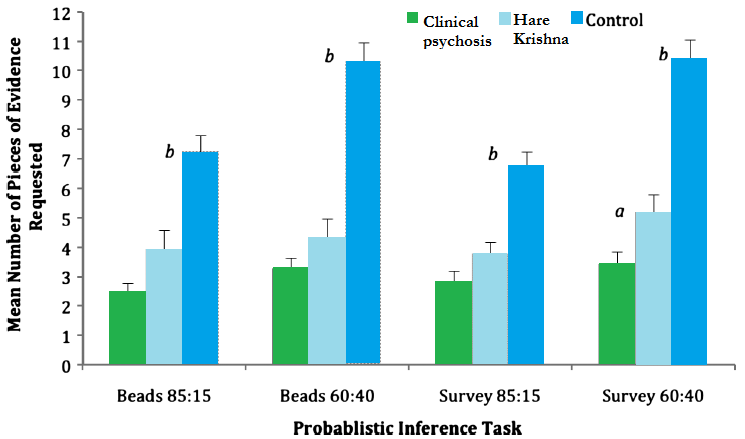 Suppose I were to tell you that I had a jar, hidden behind a screen, filled either with 85 red and 15 blue marbles, or with 15 red and 85 blue marbles.

This is the game that Michelle Lim (Washington University in St. Louis) and colleagues from two Universities in Melbourne, Australia, played with different groups of people: 25 people with full-blown psychosis, 29 Hare Krishna devotees from the International Society of Krishna Consciousness temple in metropolitan Melbourne, and a control group comprising 23 Christians and 40 nonreligious individuals.

What they found was that, while the control group asked on average for 7 marbles before they were confident enough to say whether the jar was filled with mostly red or mostly blue marbles, the psychotic patients asked for only two.

The Hare Krishna devotees were halfway between the two. They asked for around 4 marbles before making their minds up.

Lim and colleagues ran several similar tests. One in which there were 60 marbles of one colour and 40 of the other. And two tests in which they gave their subjects words to describe an individual (purportedly from a survey of that individuals acquaintances), and asked them to say if the individual was mostly liked or disliked. These words were either positive or negative, with a similar distribution to the red/blue marble task.

All of these tests gave the same basic results. Psychotics required little evidence before coming to a conclusion, while Hare Krishna devotees required more, but less than the control group.

In other words, the Hare Krishna devotees were prone to jump to conclusions.

Lim believes that this is evidence that psychosis runs on a continuum, from psychotic to normal, and that members of new religious movements (like the Hare Krishna devotees studied) lie somewhere on that scale – not psychotic, but with some characteristics that are similar.

The main differences between psychotic individuals and members of new religious movements, she suggests (based on detailed analysis of the results) are that psychotic individuals find it especially hard to weigh evidence related to emotions (the survey task in this study), they have more delusional distress, and have more severe hallucinations and delusions.

But she concludes that the tendency to jump to conclusions based on limited evidence is a real contributor to both having and maintaining delusions. And that probably explains why these people are attracted to new religious movements.

November 17, 2012 Under pressure, even scientists say things exist for a purpose
Recent Comments
0 | Leave a Comment
Browse Our Archives
Related posts from Epiphenom