May 19, 2013 by Epiphenom
0 Comments
Religion is halfway between a fact and an opinion – according to kids and adults May 19, 2013 Epiphenom

Is it possible for two people to disagree, and for both to be right?

Well it depends, of course, on what they’re disagreeing about. If it’s a matter of fact (‘Dinosaurs are extinct’), then the answer is ‘no’. On the other hand, if the discussion is about what flavour of ice cream is best then, well we are probably going to have to agree to differ.

But is religion a fact or an opinion? And do kids draw the same distinction as adults? To find out, Larisa Heiphetz (a psychologist at Harvard University in the USA) and colleagues quizzed 100 children about a faraway planet, Tamsena. 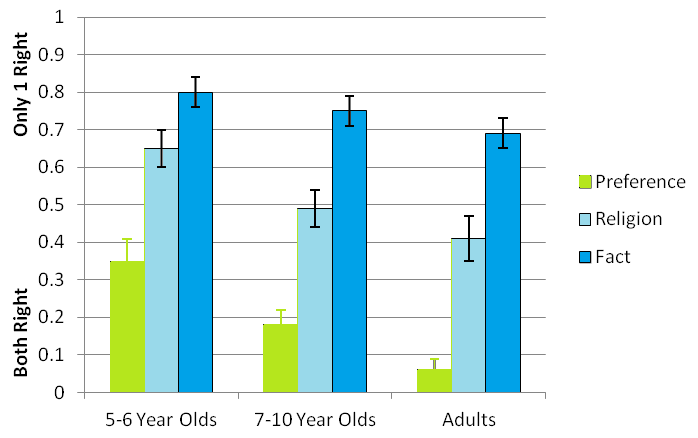 The kids were asked whether or not the two Tamsenites could both be right about these matters, or if only one of them could be right. They asked 37 adults (average age 27 years) the same questions.

The results suggested that, although seemed to be a trend with increasing age, the same pattern of results was seen in all age groups.

And questions involving mystical beings were half way between the two.

Interestingly, there seemed to be a trend towards ambivalence with increasing age – although this wasn’t really confirmed statistically. It looks like older people are more likely to accept that there are many issues about which multiple opinions may be correct (or, at least, about which it’s not possible to tell).

So that’s a fantasy planet? What about questions about the real world?

Well they did a similar study but instead involving real questions of fact and preference, and about religion. They got pretty much the same results, although a little less clear cut (that’s probably because having some knowledge of the answers to the questions helped the children to judge whether they were matters of fact or opinion).

Heiphetz and colleagues conclude that:

Children as young as 5 years seem to represent other minds as capable of containing conflicting beliefs. Additionally, around the age of 7 years, children become more likely to say that two people whose preferences conflict can both be right. This developmental shift may reflect children’s increasing experience with contradictory preferences as they begin elementary school and learn to navigate the conflicting preferences of their peers.

So it seems that children do have to learn (or develop the ability) to understand that differences of opinion can be legitimate.

But at every age, both children and adults seem to agree that religion occupies some kind of half-way house between fact and opinion!

May 13, 2013
Countries with a state religion also have fewer political and civil freedoms
Next Post