Do the right thing and hang the consequences!

Do the right thing and hang the consequences! September 28, 2013 Epiphenom

Is it ever OK to break the rules? Are some values simply sacred, never to be abandoned? When faced with a moral dilemma, do you always hold fast or do you sometimes bend?

We know from previous research that religious conservatives tend to favour moral absolutes. There are certain rules that must be adhered to, even if a clear justification seems hard to come by.

One theory about why this is so is that the religious don’t want to think to hard. It’s just easier to say that rules is rules.

But Jared Piazza (University of Pennsylvania) and Paulo Sousa (Queen’s University Belfast, UK) suspected something else is happening. They think that religious people believe that consequences are unimportant – adhering to taboos and conventions isthe objective, not optimising outcomes.

To test this, they ran three online studies putting some hypothetical scenarios to adults – mostly in the US but in the third study they extended their sample to India.

In the first study, they found that religious people were less likely to say that it is acceptable to break a promise if the result is to “produce greater good than bad”. OK, but feasibly that could happen if religious people simply don’t care much about what happens to other people.

So then they rephrased their questions, asking if it’s OK to break a rule if that means that the rule will be broken less in the future. For example, they asked if their subjects agreed that “If breaking the law will prevent even more law breaking, then it is morally permissible to break the law”

Still the religious subjects were less likely to approve of rule breaking. They were not ‘consequentialist’ thinkers.

But even so, this may all be something to do with not wanting to cause or permit something bad to happen. So in the final study, they asked about moral transgressions with no consequences at all, either good or ill.

They got their subjects to read a couple of scenarios – one depicting incest, and one depicting cannibalism. They asked them whether this was permissible or impermissible. If the subject said it was impermissible, then they went to extra lengths to explain to them that these were acts that don’t cause any harm, injustice or negative consequences 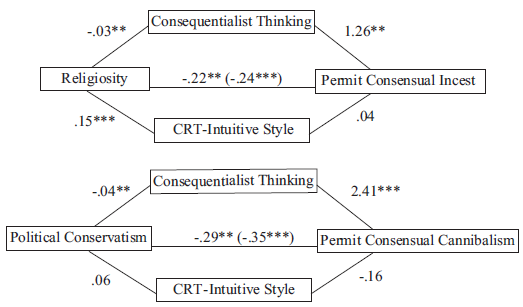 When they put all these data into their model (shown in the figure), what popped out was that the lack of interest in consequences, rather than intuitive thinking, was the best explanation for the rejection of incest by the religious and of canabalism by political conservatives.

Interestingly, it didn’t matter whether their subjects were American or Indian – they saw the same pattern.

Piazza had previously shown that religious people are more likely to appeal to rules, rather than outcomes, when justifying their condemnation of wrongdoers. In this study, Piazza and Sousa say:

We have shown that both religious and conservative-minded individuals are reluctant to endorse the permissibility of various rule violations even when doing so optimizes the good (Study 1), prevents further wrongdoing (Study 2), or produces no negative consequences (Study 3).

That’s pretty powerfuls stuff. What’s more, it seems to be particularly linked to religion, rather than political conservatism – even though the two overlap to quite a degree.

So, after reading through all this, you’re probably thinking that this is one in the eye for religion. After all, it seems pretty simple not to bend the rules in order to get better outcomes. But this is one of those areas where it all depends on which lens you use to view the world – as the study that I’ll talk about in my next post will show!