What would you do if fate had been a little unkind to you, but you get the chance to make it up for yourself with a small lie?

Take, for example, the experimental setup that Shaul Shalvi and David Leiser, both at Ben Gurion University of the Negev used on two groups of Israeli students. One group was from a secular campus, the other from a ‘religious’ one – meaning that they were orthodox jews.

Then they rolled the die again – just to check that it wasn’t loaded. And once again, only they could see the results.

So, what happened? Did everyone faithfully report the number they got with the first die roll? Or did some people, dissatisfied with their luck the first time round, feel they deserved something better? Maybe they reported the second roll instead?

Well, this was a genuinely anonymous experiment, so Shalvi and Leiser couldn’t tell if any particular individual lied. But they could look at the statistics. 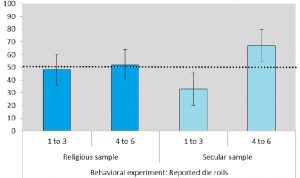 As you can see in the figure, the religious students reported rolling the same number of low (1-3) and high (4-6) numbers. In other words, what they reported was exactly what you would expect from chance.

The secular students, however, were much more likely to report rolling a 4-6. Some of them must be lying!

To understand why some secular students felt it was OK to lie, a week later Shalvi and Leiser asked some of the students to evaluate some examples of other people playing the die-rolling game.

What this suggests is that secular student’s views of what is dishonest or not depends on the circumstances. If someone is feeling hard done by, it’s OK to tell a little lie to restore the balance. For religious students, lying is lying and that’s it.

Lying and trust go hand in hand. If everyone strictly follows the rules, then you know where you are. But if people are willing to bend the rules in their own interests, then communal life become much more tricky.

It seems to me that, while at first sight the rigid approach to moral rules seems harsh and possibly dangerous, it is probably essential for close communities. When you absolutely depend on your neighbours, you’d better be sure you know how they are going to behave!

So although it might seem crazy that religious people rely more on rules than on consequences when determining what is right and wrong, it might well be a sensible strategy when the circumstances are right.

September 28, 2013
Do the right thing and hang the consequences!
Next Post