Is it ever OK to lie? If they are honest, most people would say “yes”. After all small lies, done for the greater good, are what lubricates many social interactions. In fact, lying is probably one of the key things that sets us apart from other animals.

Of course, lying is also socially destructive, which is why there are strong cultural pressures against lying. That creates a quandary, since you have to use your judgement about when to contravene social norms.

Vassilis Saroglou and Matthieu Van Pachterbeke, psychologists at Université catholique de Louvain, have previously shown that authoritarians (people characterised by conservative ideology and submission to established authorities) tend to disapprove of lying even when it might result in benefit to an associate and no overall harm to wider society.

So, they wanted to know whether religious people are the same and, even more importantly, whether there was an interaction between religion and authoritarianism. You see, religiosity and authoritarianism quite often go hand-in-hand, so it’s not clear which is having the effect on lying.

The experimental set-up was straightforward. First the subjects (who were recruited by a student asking around friends and neighbours!) were given a word search puzzle to do.

This word search either had religious words to find, or non-religious words. That way, half the subjects were primed with religion, and half were not.

Then they were given a series of nine moral dilemmas to answer. Here’s one, for example:

You visit a friend who has been hospitalized for one year due to late-stage cancer. He spent his life running a small industry. He is very proud of it, having started it from nothing and expanding it to having, one year ago, 60 workers in a familial atmosphere. The person handed the management of this firm on to his son just after his cancer diagnosis, hoping that his son would carry on his work. The patient asks you for news about the firm. You know that, aiming gains, his son sold the firm to a multinational that restructured it. Do you tell the patient or do you lie?

They weren’t all explicitly about lying, although they did involve breaking the rules and not telling the whole truth in some minor way (like not reporting an acquaintance who is a foreign student to the police who are looking for him to deport him following a car accident). 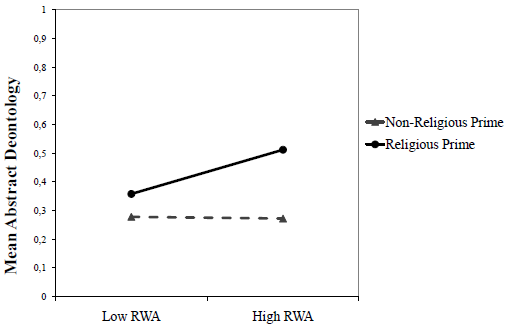 Anyway, what they found was interesting, and the graphic basically tells the story.

For people who didn’t get the religious prime, authoritarianism didn’t matter. Authoritarians and non-authoritarians were equally comfortable in being a little bit disopbedient.

But for authoritarians, there was an effect. Priming them with religion made them significantly more likely to obey abstract social norms, even to the detriment of their associates.

Now, it wasn’t a huge effect, but then you wouldn’t really expect to see a large effect from such a trivial set-up.

But it is a critically important effect. What it says is that religious activates authoritarianism – at least for these Belgians. Unprompted, the moral decisions of authoritarians and liberals were similar.

Subtly remind the authoritarians of religion, however, and they ramp up their moral righteousness!

October 4, 2011
Supernatural explanations just don't occur to kids - they need to be taught them
Next Post