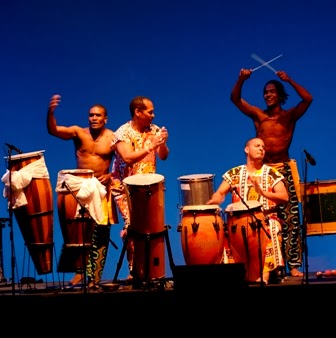 Humans devote so much time to rhythmic group activities (singing, dancing, marching) that it seems intuitive that there must be something to it. Sure enough, a few studies recently have found that singing together and even marching together can encourage people to feel stronger ties to their co-rhythmacists.

Such activities are often folded into religion, and religion also tends to foster group ties. So maybe religion and rhythm act in synergy? That’s what Emma Cohen, at Oxford University, and colleagues Roger Mundry and Sebastian Kirschner from the Max Planck Institute sought to investigate.

To do this, they went to Brazil. Brazil is big on drumming, and in particular the local Afro-Brazilian religions have strong drumming traditions.

Cohen and colleagues recruited 32 atabaque drummers (all men, as only men do the drumming) into a really nicely designed experiment. Basically, they each did some solo drumming and then two sessions in groups of four.

They were trained in some rhythms, and their efforts were recorded electronically – which allowed their rhythmic accuracy to be assessed. While playing, they were shown the rhythms on a computer monitor – and that allowed the experimenters to tweak the temp as well as dictate the rhythm of each drummer.

Before the drumming, half of them listened to a recorded narration about drumming with either a secular or a religious focus. The idea was to see if this affected how the drummers performed in the tests they took after they had finished drumming.

So, after each session, the drummers were given 10 Brazilian real coins, of which they could anonymously contribute some to a communal pot. The lowest amount contributed would be doubled and given to each of the four drummers. So this is a measure of how much they trust the others.

But the researchers found that drumming, whether synchronised or not, had no effect on contributions.

Likewise, the religious priming had no statistically significant effect – although there was a trend that suggested that religious priming did increase contributions. Quite why this was so is hard to interpret as the drummers actually reported feeling more connected with their fellow drummers after the secular prime!

What’s more, Afro-Brazilian religion doesn’t have the moral component that’s so strong in the monotheisms. Their deities are often not stalwart do-gooders, so even if the drummers felt they were being watched by the spirits, this would not necessarily encourage good behaviour. Hardly any of them were actively involved in these religions anyway.

So what to make of this? On the face of it, it’s a negative result from a really nicely designed study, which would tend to make you think that claims for the effect of synchronised activity on attitudes towards fellow group members are overblown.

And yet I’m left with a nagging suspicion that the study was simply too small. At no point in the manuscript do they provide a statistical power calculation – which is an essential step in working out whether you have enough people in your study to show an effect (if one exists). There were a lot of groups and conditions, so my gut feeling is that you would probably need a lot of drummers to cut through the statistical noise.

Which is a real shame, as otherwise this was one of the most meticulously designed studies on this topic that I have seen!

November 5, 2013 Do even atheists see a purpose behind random life events?
Recent Comments
0 | Leave a Comment
Browse Our Archives
get the latest from
Nonreligious
Sign up for our newsletter
POPULAR AT PATHEOS Nonreligious
1