Why are unfalsifiable beliefs so attractive?

Recently, Dr. John Wentworth, professor of physics at the Massachusetts Institute of Technology, argued that regardless of future advances, science will likely never discover whether the supernatural exists. He said,”almost always, our research raises more questions than it answers, therefore the question of God’s existence just isn’t scientifically testable.”

If you are religious, how does reading that make you feel about the validity of your religious beliefs? OK, so how about this version:

Recently, Dr. John Wentworth, professor of physics at the Massachusetts Institute of Technology argued that yes, one day science will be able to shed light on whether the supernatural exists. He said, “Eventually, we may be able to test scientifically whether or not God exists”

Of course, neither is true. Dr Wentworth is an invention, created for the purposes of a study by Justin Friesen (now at York University, Toronto) and colleagues.

When they gave expanded versions over those stories to a group of 103 American adults, they found that those who were highly religious reported stronger religious convictions after they read that science cannot disprove the existence of god

That seems an odd result, but the researchers reckoned it might be linked to a fundamental psychological drive that underpins religious and similar beliefs. Specifically, when people feel threatened or insecure, they latch on to beliefs they feel to be unshakeable.

To test this idea, they ran a similar experiment on a group of Canadian undergrads who were all at least slightly religious. This time, the news stories they were given to read were about the discovery of the Higgs Boson.

Then, after giving them a few meaningless tasks so they wouldn’t guess the purpose of the study, they asked them about different reasons for believing in god. Most were unfalsifiable, such as “Living a moral life would be impossible without God”. But some were falsifiable, for example “Historical and archaeological evidence shows how God intervened in the world”.

Take a look at the graphs below, and I’ll walk you through them. 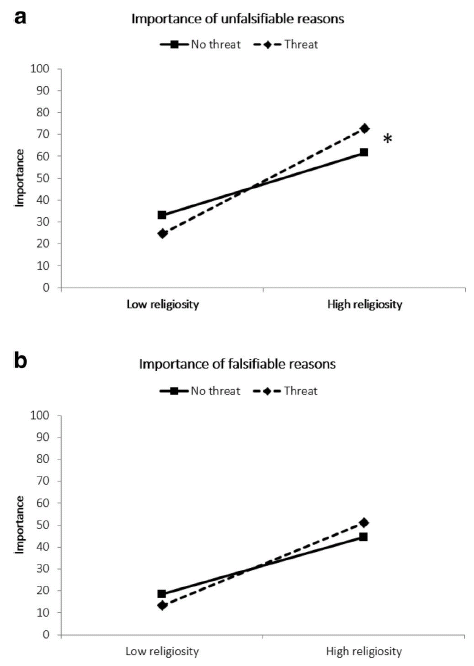 When their beliefs were threatened (dotted line), the highly religious rate both kinds of reasons as more compelling, while the opposite happened with the less religious. The differences are statistically significant, but the trend is interesting anyway.

But the biggest increase was for the ratings the highly religious gave to unfalsifiable reasons for belief. When they felt their beliefs were threatened by evidence, they suddenly found unfalsifiable beliefs significantly more compelling.

Friesen and colleagues point out that, on their own, these data are not conclusive. It might be that the core beliefs of religion are unfalsifiable, and what we’re seeing here is simply people clinging to core beliefs when their belief system is threatened.

But they did similar experiments look at politics and found that, here too, people prefer unfalsifiable beliefs when they are challenged in some fundamental way.

We suggest that when people turn to unfalsifiability, it is because these “practical” issues—for us, existential motives—like having positive self-worth, being a valued group member, or obtaining symbolic immortality, have temporarily trumped questions of belief accuracy or testability. 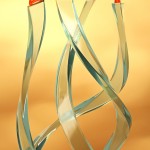 January 2, 2015 The Best Science of Religion Stories of 2014
Recent Comments
0 | Leave a Comment
Browse Our Archives
Follow Us!