The Abolition of Man: There’s an App for That

“Download our app for more convenience!” “Next-day home delivery!” “Order now and stream or download immediately!” With the tap of a screen, all the goods and services ever needed in a local economy can be piped into my living room or brought to my door; I don’t even have to leave the couch. In a recent discussion of C.S. Lewis’ The Abolition of Man, I could not help but think of the current state of how technology is, as he would put it, pushing mankind “against the grain of the Universe”. Of course, one can read for himself the arguments that Lewis makes about technology, procreation, contraception, and sex in general. However, while I agree with many of C.S. Lewis’ arguments, there has already been enough discussion by more qualified people on this subject. Rather, I will stick to a subject to which I feel I can be of some use. What strikes me as a secondary aid to Lewis’s “abolition” is the prevalence of the internet, the smartphone and how, much like invention has bifurcated the pleasurable act of sex from all of its other necessary and natural functions, the age of the smartphone and its ever-increasing “convenience” has taken away the very humanity of our normal human interaction. It has caused us to withdraw into our screens and apps and made us ignorant to the communal and relational part of our nature.

You can see it all around you, either in the coffee shop, on the train ride to work, and perhaps even at the dinner table. Our eyes, ears and other modes of attention are more and more drawn away from each other and the moment itself and are instead more attracted to the shining screen in our hands or on our desk. Ah yes, the age of technology as we know it has created an age of convenience in all other aspects of our life, much like the age of biological “innovation” has offered us a great deal of convenience in the separation of sexual pleasure from all of its other repercussions and necessities. In the case of internet pornography, technology has even colluded with sexual abstraction in this effort. You can get almost anything you want nowadays through a couple of taps of the index finger onto the shining screen. You can buy your clothes, your food, receive the knowledge you wish from any book ever written and preserved with a quick monetary transaction of the credit card and the download of an application. It seems that anything we want can now be given to us readymade and even brought to our door, if we so desire. But is this really in our best interest? Is it consistent with our nature as human beings? Or are we, and I would argue, rather going against that grain of the Universe and contradicting a very basic principle of our humanity in this electronic isolation?

I ask you to imagine what your day would look like without the available conveniences now afforded to us. Your morning news might have to come from a newsstand where you would have to interact with someone, as would your food, and your clothing. Rather, the interaction is removed from the transaction, leaving us to draw even further into ourselves than we would have to at the haberdasher, the newsstand and the grocery. Of course, what we have already (which Berry and Nisbet discuss in full) is an age where we no longer know the people behind these desks, who made the products, or even from whence these things come, but I will leave the reader to wrestle with these issues on his own watch. Yes, our market is already abstracted, as Berry would put it, but the current trend is to go even farther with the abstraction. Where we have already seen our nature as a community of souls (or communities at all, really) wavering on the mat, our desire to withdraw into an electronic sphere is currently delivering the final uppercut to put it down for the count, as it were.

Why would we get to know a mechanic whom we know and trust when we have an app that will simply point us to the closest or cheapest auto shop? Why would we strike up a conversation at the newsstand or on the train ride to work when we can glean all the news of the day from a simple online aggregation source? Why should children learn the basics of human interaction at the playground or in the schoolyard, when they can just as easily be entertained by flashing colors, lights and shapes instead of playing with other children? Why should we know the person behind the counter or the character of the owner of our local clothing shop when we can have all we “need” shipped directly to our door in 2-3 business days? What good is having and maintaining the old family Bible when there’s an app for that? These are questions, I am sad to say, that we are forced to wrestle with in the modern context?

We as Christians and as human beings have bought more and more into the myth that we are abstract and individual creatures since Thomas Hobbes asserted that human life is “solitary, poor, nasty, brutish and short”. While this may seem averse to the Christian mind, it is becoming less and less a problem for the popular will of the culture in which we live. We mock and deride people who film concerts on their cell phones, but we don’t know why this seems “wrong” or “odd” to us. Perhaps it is because those behind the phone are withdrawing into their screens and circuits and depriving themselves of the shared communal experience of the music. We don’t like to see young children obsessed with an electronic device, but we’re not quite sure why. Perhaps the child is depriving himself of the social interactions necessary to learn things like fair play and social skills. We lament, for whatever unfathomable reason, that our books are now downloaded material rather than the ink and paper that we grew up with. Now, there’s nothing inherently wrong with a digital book, but what about the forgotten joys of visiting the local bookshop, talking with the patron and having a conversation about what you want to read next?

Alas, the idea of the community of souls and people has become as clichéd as the belief in dragons and unicorns in the modern discussion. While the Apostles and the first monastic orders realized that there was something communal about our nature (think about why we observe “Communion”), we have given that up for quick and easy convenience. We no longer talk with people, we no longer commune, which our true human nature would tell us is beneficial for the body, mind, and soul. These is not meant to simply lament the state of things, seeing as there’s rarely a true “point of no return”, but rather to spark an internal conversation, which will, I hope, lead to an external conversation in the office or at the dinner table. We are individuals, but we don’t have an individual nature. This is a cultural fallacy that has been begotten of a philosophical, anthropological and perhaps even a theological fallacy that has been aided and reinforced by our technology. Where the automobile and the internet connection allowed us to withdraw into our own households, we are now seeing the human person withdraw into himself. If we wish to be a world of souls in communion, then perhaps we should restore the community of souls. If we wish to restore a community of souls, perhaps the best way is to simply work to reclaim our communal nature and communities, full stop.

Nate Madden is a current Fellow at the John Jay Institute and a graduate of The Citadel, where he received degrees in International & Military Affairs and German Language and Culture. His work experience and research have included United States military policy in Washington, DC, International and Agricultural Development in rural Uganda, and teaching English as part of a bridge-building program in former East Germany.

December 10, 2014 Respectful Conversations about Divisive Issues: a Place to Start
Browse Our Archives
Related posts from The Evangelical Pulpit 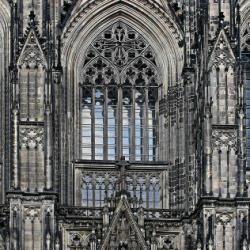 Evangelical
Learning, the Good Life, and Skin in the...
The Evangelical Pulpit

Pastor berates congregation for not buying him designer...
A pastor’s sermon in Kansas City went viral recently for all the...
view all Evangelical blogs
Copyright 2008-2021, Patheos. All rights reserved.
Close Ad